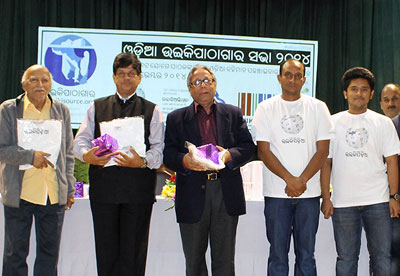 Odisha Channel Bureau Bhubaneswar, Nov 28: Wikipedia that has begun a knowledge sharing movement worldwide has one more addition in Odia language after the success of Odia Wikipedia.The new project Odia Wikisource is live on the Internet at or.wikisource.org.Started two years ago as an incubator project went through a tough process of being accessed by the Wikimedia language committee and Wikimedia Foundation’s board before being released last month.Speaking in a formal public release function at Jayadev Bhawan here today, notable linguist Padma Shri Debiprasanna Pattanayak emphasised the importance of such a project in Odia language to make it available for computer, mobile and tablet, etc.so that more youngsters would take interest in Odia.The project now houses many precious books including writings of noted authors like Fakir Mohan Senapati and Upendra Bhanja and the entire Odia Bhagabata.Inaugurating “Odia Wikisource Sabha 2014” formally, Pattanayak told how important e-books are for a language like Odia to take it to masses especially who are outside Odisha and have no access to libraries.“Internet should be treated as a friend of our language rather than it being considered to cause any harm to it,” expressed Odia daily Sambad’s editor Soumya Ranjan Patnaik.He also announced relicensing 19 books published by Ama Odisha under a Creative Commons Share Alike license that will be digitized on Wikisource.He showed interest for collaborating with Odia Wikimedia community in the future for such language and cultural work.Presiding on this occasion, notable poet and thinker Haraprasad Das addressed the gathering and advised the youth for filling the gaps of Odia language using internet.Credit for the most extensive work on Odia book digitization always goes to Bhubaneswar based non-profit Srujanika that digitized about 740 books.It includes most periodicals that were published 1850-1950.Odia Wikisource will further this work by going one step ahead in digitizing books in the form of text in Unicode so that they appear in a search engine search in Odia language.It allows readers to read books from computers, mobiles and tablets, with even permitting to print and use the content elsewhere.These books are way lighter than the scanned books.This is making a way for audio books.Books for which copyright is lapsed and many rare books could be digitized and preserved for the future.Apart from old and valuable books, books by renowned and contemporary authors like Debiprasanna Pattanayak, Ramakrushna Nanda and Jagannath Mohanty, Subrat Prusty, Bharat Majhi and Nirmala Kumari Mohapata, and many other authors have been taken by the Odia Wikisource team to digitize.“Odia Wikisource is connecting me with my roots—my language and culture,” nostalgically mentions Pankajbala Sarangi, who has made the highest of 1200 edits on Odia Wikisource.In collaboration with Wikimedians from Bhubaneswar, Bangalore based non-profit Centre for Internet and Society’s Access To Knowledge program was instrumentalto train faculty of Kalinga Institute of Social Sciences (KISS).“50 students from KISS have digitized four books and are continuing to contribute more,” says Preetinanda Roy.Wikimedians also converted Odia Bhagabata to Unicode by using the source text from Odia.org.“We are aiming to bring more rare books and manuscripts in Odia in the near future,” says Odia Wikimedian Mrutyunjaya Kar.