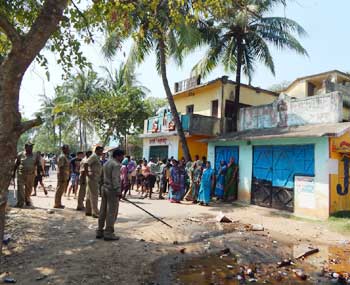 Odisha Channel Bureau Kendrapara, Mar 9: A day after people and police fought a pitched battle in a remote village of Odiaha’s Kendrapara district; situation continues to remain surcharged much to the headache for both the police and civil administration of this politically-sensitive coastal district.An anti-liquor rally spearheaded by women to commemorate international women’s day had turned violent yesterday in Namtara village under Rajkanika police station.Police have unleashed a reign of terror in the village.Innocent people have been picked up during midnight hours leaving the people in a state of panic.The whole of the village has turned into a police barrack.A congress delegation headed by OPCC president Prasad Harichandan is scheduled the visit the disturbed village today to assess the situation.The campaigners and locals squarely blamed the police for the eruption of violence in the sleepy village.Six police men including the head of Rajkanika police station were injured as campaigners had given vent to their anger as the police had stopped them from picketing in front of an IMFL shop in the village.The licensed liquor shop had been razed to the ground and police jeep was set afire by the mob.Later the mob had beaten up the police personnel. Later police had swung into action yesterday evening by marching into the village and firing at the people.At least nine persons from the village were injured and all of them have been shifted to SCB Medical College and Hospital at Cuttack in critical condition.Kendrapara SP Satish Gajaviye however said “police were forced to open four rounds of aerial firing to break up the unruly assembly of people in the village.Stampede ensued following the aerial firing.Nine people were hurt following the stampede”.Aul MLA Debendra Sharma refuted the police version and asserted that at least six persons have sustained bullet injuries while three others received fracture injury due to stampede.Police targeted the unarmed people and opened fire at them.“Peaceful picketers were beaten up by police.It could be said beyond doubt that the khaki-clad men were dispersing the people at the behest of the IMFL shop owner.That had led the people to take law unto their hands.“Peaceful loving people here have no past history of resorting to violence.However they were exasperated over the growing alcoholism in the area and the opening of a licensed IMFL shop in the village”, he said.