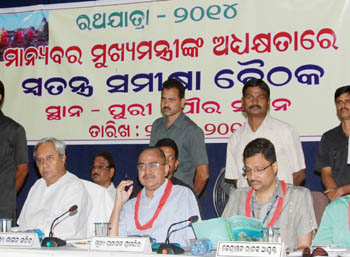 Odisha Channel Bureau Puri, June 22: Odisha Chief Minister Naveen Patnaik reviewed the preparations for the June 29 Rath Yatra of Lord Jagannath at a high level meeting held in Puri on Sunday.Patnaik was apprised of the Rath Yatra preparation by District Magistrate Dhiren Patnaik and Arvind Padhee, Chief Administrator of the Temple Administration.Health and drainage departments came under heavy criticism from the members for dismal and unfinished work.Most of the members pointed out that commitments made by the health department to fill up vacant posts of medicos and staff during the last two such meetings were yet to be accomplished, while drainage department, which has left the city roads in a poor state, came under scanner as they failed to fulfill their commitments to the committee over completion of the entrusted job.Members decried absence of Health Minister Atanu Sabyasachi and the Health Secretary in the meeting.Additional Secretary of Health informed that that government doctors are not available and they are trying to induct doctors on contract to cater the health care need during the festival.He said over 80 beds would be added to the existing facility in the district headquarters hospital situated in the town.The food inspectors were posted to ensure food quality, the Additional Secretary informed.The Chief Minister urged the servitors and all concerned to extend their cooperation for the smooth conduct of the Rath Yatra.Later, Patnaik flagged of four AC passenger busses to ply between Puri and Bhubaneswar, and unveiled the official wall book Rooparekha on Rath Yatra.He also accepted the ropes manufactured by the state coir corporation to be used for pulling of the three chariots.