Puppeteers struggle to save Sakhi Kandhei 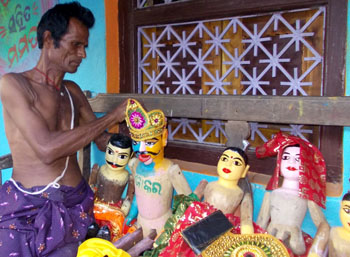 Odisha Channel Bureau Kendrapara (Odisha), July 6: A handful of puppeteers from a remote village of Kendrapara district are still stuck to the task of reviving the folk art, which is on the verge of extinction elsewhere.It’s tough battle to keep things going.There are only a few craftsmen left in the State for the string puppet show, Sakhi Kandhei.Puppetry has been one of the most ancient forms of entertainment.It has been an effective visual art to convey varied messages to the society.But now the visual art is on the verge of extinction.Lack of patronage both from the government and non government sectors has dealt a blow to this popular form of entertainment, remarked researcher Basudeb Das.The obscure Palakana village in Kendrapara has kept this form of folk art alive.Puppeteers from the village are still in demand for live puppet shows.But the question that remains uppermost in the mind is that how long the handful of artisans would carry forward the art to future generation, he felt. String puppet shows is a unique form of entertainment which is different from others.The wooden dolls attached to strings backed up by music and background voice narrate stories tales right from the Puranas to kingship to modern day social drama.“The entertainment value of the puppet shows is intrinsic.Select band of audience still love the shows.We still perform and win appreciation,” Fakir Singh, 62-year-old puppeteer, from Palakana village quipped.“I carve out wooden puppets of order received from puppet show operators.The dolls made by me fetch me money.Besides, I also earn by staging string puppetry shows,” he said.“When I was hardly 12 year-old, I had left house to join in a puppet group in Dhenkanal.The puppet shows were in great demand then.The art declined considerably with the advent of television sets in the early eighties.Since then, it has become a struggle for survival for puppet troupes.However for a year or two, the demand on puppet shows is on the rise to a certain extent.Invitation to stage shows is mostly pouring in from rural areas of western parts of the State,” he narrated. But the crux of the problem is that very few skilled puppeteers are left to further the art.In my village, there are about a dozen of families who are directly involved in puppetry.Unless, the State Government provides fiscal incentives to the artists, this form of art may be lost forever in a decade or two.Puppeteers enliven the stage with mythological, historical and social theme.Wooden puppets shift on the stage with invisible strings attached to it.The colourfully attired dolls mesmerize the audience with its scintillating and shinning movement.The background narratives laced with folk music enthrall onlookers.