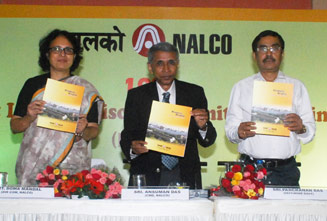 In her welcome address, Mondal highlighted Nalco’s concern as a mother industry towards promoting the interest of local Micro & Small Enterprises (MSEs).Speaking on the occasion, Das said that in context of globalisation it is evident that the MSE units should lay more emphasis in maintaining quality, cost competitiveness and technological up gradations.“Moreover NALCO is always eager to support the MSEs, in whatever way that is feasible,” said Das.He also said that the concrete efforts put in both by Nalco and MSE units, with the requisite support from the concerned Government bodies, has helped to build up a rising trend in the business dealings between NALCO & MSE units.Sharing his views on the upcoming Aluminium Park at Angul, Das said that the same is expected to promote downstream and ancillary industries.NALCO has committed to supply 50,000 MT hot metal to the JV Company.Odisha based industries should take advantage of it.Speaking on this occasion, Dash advised all District Industries Centres (DICs) to be more active as facilitators between NALCO and the MSEs.Similarly sharing their views, other dignitaries appreciated the role of NALCO as mother industry and expressed their satisfaction on company’s functioning towards promotion of Ancillary and MSE units in the State.A booklet printed by NALCO’s S&P Complex ‘Product Profile for Micro and Small Enterprises’ was released on this occasion.During the meeting, presentations were made by the NALCO officials explaining the methodology of placement of orders on Ancillary units.The items identified for purchases from MSE/Ancillary units were also detailed out.It may be mentioned here that Nalco has given Ancillary status to 57 MSEs of the State.Participants including PLAC members, representatives from OSIC, Directorate of Industries, Export Promotion & Marketing (EP&M), along with representatives of Odisha Small Scale Industries Association, Odisha Young Entrepreneurs Association, Odisha Assembly of Small & Medium Enterprises, Utkal Chamber of Commerce and Industries and others were present on the occasion.