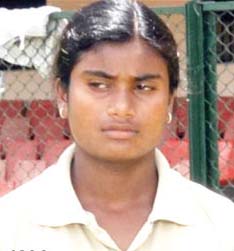 Odisha Channel Bureau Bhubaneswar, Sep 14: Odisha’s ace athlete Purnima Hembram has bagged the prestigous 22nd Ekalabya Award for the year 2014.She will get a cash reward of Rs.2 lakh along with citation.The Ekalabya Award Commttee comprising of jury members drawn from different walks of life were unanimous in selecting Purnima Hembram for the prestigious award here today.Purnima has a brilliant international and national track record for the past two years.Among her achievements include gold medals in women heptathlon event at the 15th Asian Junior Athletics Championship at Ranchi in 2013.She will be presented the award at the Ekalabya Award function, the date for which will be announced later. Besides Purnima, two other sportspersons, both women, will be felicitated for remarkable performance in various international and national level championships in their respective fields.They are – woman cricketer Rasanara Parbin and rower Manjula Xess.Both will receive a cash prize of Rs.50,000 each along with citations.Announcing the names of the award winners, Baijayant Panda, Member of Parliament and Trustee of IMPaCT said that IMPaCT has been in continuous pursuit to recognise and foster excellence in sports and literature besides contributing to the general welfare of the society at large.“This award has been and will attract young talent and inspire them to perform better in the national and international arena.This shall make our State proud,” Panda added.Ekalabya Award, instituted by IMPaCT in the years 1993 has come a long way to be recognised as the most prestigious sports award in Odisha, drawing parallels with many national awards.IMPaCT (Indian Metals Public Charitable Trust), managed by IMFA Group, plays a leading roles in undertaking various social welfare measures in the State.Ekalabya Award is given every year to young sportspersons of Odisha in recognition of their outstanding performance in the preceding two years.Also the Trust, through Sarala Award strives for literary enrichment.