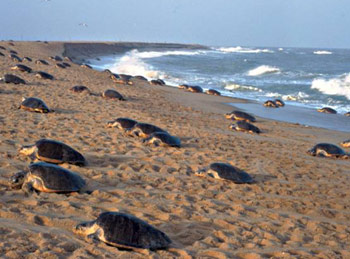 Odisha Channel Bureau Bhubaneswar, Oct 5: Well-known biologist and Odissi dancer Priyambada Mohanty-Hejmadi was conferred the prestigious Biju Patnaik Award for Wildlife Conservation 2013-14 by the Odisha Government here on Sunday.Priyambada was presented the award for her significant contribution towards wildlife conservation and management in the field of developmental biology, herpetology, Olive Ridley turtles and estuarine crocodile both nationally and internationally.The Biju Patnaik Award for Wildlife Conservation carried a trophy, citation and Rs.2 lakh award amount.She was presented the award on the occasion of celebration of 60th Wildlife Week at Jayadev Bhavan of the city.The function was organised by the State Government’s Department of Forest and Environment.Principal Secretary of the Department R.K.Sharma was the Chief Guest at the State level function.The winners of the State level competitions conducted under `sit and draw’ for junior and senior school children and wildlife photography were also awarded at the function.A photo exhibition on conservation of wildlife and their habitat was also inaugurated by Sharma on the occasion.Those who addressed the meeting sought the cooperation of the people of Odisha for protection of wildlife and their habitats.