Total eclipse of the moon on Wednesday 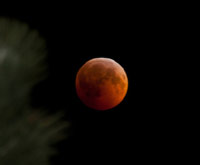 Odisha Channel Bureau Bhubaneswar, Oct 7: A total eclipse of the moon will occur tomorrow on October 8, 2014 (16 Asvina, 1936 Saka era) from h.14-45 to h.18-05 IST.The eclipse will be visible in the region covering the Americas, Australasia and Asia, according to an official release issued by the Press Information Bureau Bhubaneswar office on Tuesday night.The places from where the beginning of the umbral phase is visible at the time of moonset are some parts of Argentina, Brazil, North Atlantic Ocean and Green Land.The places from where the ending of umbral phase is visible at the time of moonrise are Indian Ocean, some parts of India, western parts of China, some parts of Kazakhstan and Russia.At the time of moonrise, the umbral phase i.e.partial phase of the eclipse will be visible for a short duration in India, except from western region of the country, the release said.