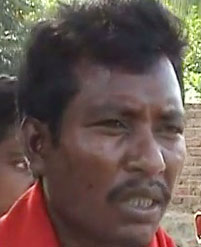 Odisha Channel Bureau Koraput, Oct 28: Well-known tribal leader and head of Chasi Mulia Adivasi Sangh (CMAS) Nachika Linga surrendered before Odisha police on Tuesday.Linga had been underground for more than four years.Linga surrendered in view of the arrest warrants pending against him and he will be produced before the court on Wednesday, according to Y.K.Jethwa, Inspector General of Police (South-Western Range).The tribal leader surrendered in Bhaliaput village before a police team and local Panchayati Raj Institution members, Jethwa informed. As many as 33 non-bailable warrants (NBWs) were issued against Linga in nearly 43 cases registered in various police stations in Koraput district, according to Jethwa.He was in the `most wanted’ list of Odisha police for his alleged involvement in the long-drawn agitation of tribals of Narayanpatna for land rights in Koraput district of the State.CMAS had been agitating against encroachment of tribal land by non-tribals in Narayanpatna area since long.Linga was also wanted by the police for his alleged involvement in the attack on Narayanpatna police station way back in 2009.Linga had tried to appear in public before and address gathering of tribal people in Narayanpatna in March this year.He, however, had stayed underground till date fearing arrest by the Central paramilitary forces deployed in Narayanpatna area.The police were also suspecting him to have links with the Maoist operating in Narayanpatna area.Meanwhile, social activist Prafulla Samantara claimed that Linga has been arrested by the police from his native village Bhaliaput and the “surrender story of the police is false”.Samantara urged the State Government to withdraw all false cases against Linga as the tribal leader is not a member of any banned organisation.