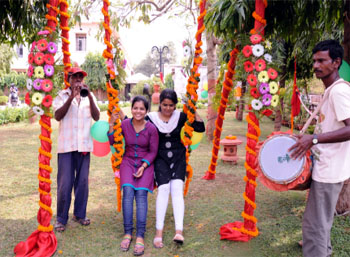 Odisha Channel Bureau Bhubaneswar: Odisha Tourism Development Corporation is all set to organise the annual Raja festival from June 13 to 16.The effort was aimed at keeping the tradition of Raja celebrations alive.According to OTDC sources, the Raja celebrations will be organised at the Pantha Nivas situated at Bhubaneswar, Sambalpur, Barkul, Rourkela, Chandipur, Paradip, Konark, Gopalpur, Puri and Cuttack.Tourists as well as the local people can visit their nearest Pantha Nivas to enjoy the festival with the swing or Doli and the sweet dishes and country cakes during the festival.The sweet dishes that will be available at the Pantha Nivas premises in the 10 towns of the State include Podapitha, Mandapitha, Aarisha Pitha, Chakuli, Kakara, Buta Nadia Tarakari and Pura Chakuli and Dahibara.Raja Parba or Mithuna Sankranti is a four day long festival and the second day signifies beginning of the solar month of Mithuna from which the season of rains starts.It welcomes the agricultural year all over Odisha, which marks, through biological symbolism, the moistening of the sun dried soil with the first showers of the monsoon in mid June thus making it ready for productivity.According to mythology, it is believed that the mother goddess Earth or the divine wife of Lord Vishnu undergoes menstruation during the first three days.The fourth day is called as Vasumati Gadhua or ceremonial bath of Bhudevi.