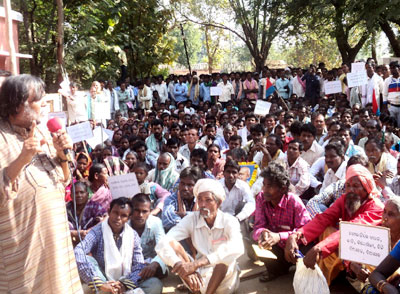 Odisha Channel Bureau Kantabanjhi, Dec 14: On the occasion of World Human Rights Day, noted rights Body Zindabad Sangathan, Bolangir and Shramik Adhikar Manch, Bolangir affiliated to Campaign for Survival and Dignity (CSD) jointly organised a protest rally at Kantabanjhi on December 10.More than 1000 of tribals and forest dwellers from nearby blocks such as Kantabanjhi, Muribahal, Turekela, Khaprakhol, Belpada, Bongomunda, Titilagarh and Patnagarh joined in the rally.The protest rally started from the Government Bus stand, Kantabajhi and moved around the town and marched towards the tahasil office.Holding placards in their hands the participants of rally highlighted their genuine demands.A public meeting was organised before the tahasil office.Trilochan Punji, the leader of the joint endeavor presided over the meeting.He shared objective of the programme sharing the various issues of Bolangir district on the Human Rights day.Joining the rally as chief guest speaker, Prafulla Samantara, noted activist and president of Lokshakti Abhijan addressed the rally and demanded a special financial package from the State Government.“The Constitution of India has provided rights to the people `to live a life with dignity’ but the Government of Odisha has failed to ensure it even in the 67 years of independence in the Bolangir district resulting in distress migration of the people to other regions in search of basic livelihood needs,” Samantara said.Addressing the gathering, Lingaraj Azad, advisor of the Niyamgiri Surakshya Samiti (NSS) said, “We have to critically analyse the system of governance that we have.This system of governance has made our representatives and our employees as the owner.They have turned as govt.which is not a good sign for our democracy and we have to think for it.”Arun Mishra, representative of Samajwadi Party suggested to identify the real leader of the people and to choose them accordingly.Advocate Bishnu Prashad Sharma advised the people to know all the constitutional rights ensured and to struggle collectively to get them.Manohar Chauhan, member of Campaign for Survival and Dignity(CSD) spoke on the implementation issues of Forest Right Act(FRA) in the district and said “FRA, 2006 the ever biggest constitutional reform which has recognised the Gram Sabha as “Gram Sabha Sarkar”.He called upon the people to use and apply the rights by adopting Gram Sabha resolutions.Satya Mehar, member of NSS and Lochan Bariha sang sangramee song and addressed the gathering.On the occasion, Lochan Bariha was declared as new president of the Zindabad Sangathan.At the end of the programme, Trilochan Punji, president of Shramik Adhikar Manch readout the demands submitted in the memorandum before the participants. A memorandum of 22 points demands was submitted to Tahasildar Ratanlal Munda.The memorandum was addressed to the Chief Minister, Government of Odisha.The important demands put forth in the memorandum are;a) Special financial package for Bolangir to meet distress migration.b) To bring change in the Inter State Migration Workman Act 1979 and ensure security of the migrant workers in other State.To issue identity card to the construction worker and to implement bonded labour prevention act and rehabilitated all released bonded labours of the district.c) To provide work in all season under MGNREGA.d) Recognition of community forest rights as per FRA, 2006.Recognition of Individual Forest Rights of the Other Traditional Forest Dwellers (OTFDs), Conversion of forest and un-surveyed villages into revenue villages.Immediate withdrawal of forest offence cases filed against tribals and forest dwellers.e) To give Scheduled Tribe status to the “Paharia Tribe” who have been scheduled in neighboring state Chhattisgarh as ST.f) To provide cultivable and homestead land to all landless and homestead less families of the Bolangir district.To regularize the land rights of all families occupying over Govt.land for generations.To give Permanent Record of Rights (RoR) over Bhugara land and Jagiri land.g) To exempt all agricultural loan of the farmers and lunch pension scheme for them.To open agricultural based industries in the Bolangir district.