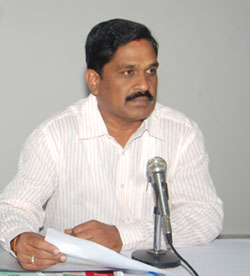 Odisha Channel Bureau Paradip, Mar 25: Paradip Port Trust surpassed the target of 69 million metric tonnes fixed by the Ministry of Shipping for the current financial year 2014-15 by handling 69.11 million metric tonnes of cargo on March 22, 2015.During the corresponding period of previous year, the port handled 66.22 million tonnes of cargo, according to an official release.The port has exhibited a growth of 4.38 percent in traffic throughput during the current financial year.The port is retaining its second position amongst all major ports in terms of traffic throughput.The port has handled 29.30 million metric tonnes of thermal coal exhibiting a growth of 17.08 percent, 7.65 million metric tonnes of coking coal with an increase of 8.68 percent and 4.20 million metric tonnes of fertilizer raw materials with a growth of 6.78 percent compared to the same period of previous year.PPT has signed a concession agreement on March 7, 2015 with M/s.Paradip International Cargo Terminal Pvt.Ltd.(PICT) for development of a multipurpose clean cargo terminal of 5 MMPTA through PPP mode on build, operate and transfer (BOT) basis.The port has also issued letter of award to the consortium of JSW and South West Ports Limited for developing a 10 MMTPA capacity iron ore terminal.M/s Essar Paradip Terminal Ltd will also develop a 10 MMTPA capacity of fully mechanised coal import terminal.With these projects and mechanization of the existing 5 berths, the total capacity of the Port will be enhanced to 177 MMTPA from the existing 108.5 MMTPA by 2019.After dredging the berth face of Central Quay – II to 14.5mtr deep during the financial year, now both Central Quay – I & II with 14.5 mtrs draught are equipped to handle panamax size vessels of 95,000 DWT. M.T.Krishna Babu, Chairman and N.Vaiyapuri, Deputy Chairman, Paradip Port Trust appreciating the performance of the port surpassing the target with the record throughput, conveyed their gratitude to Ministry of Shipping, Government of India, Govt.of Odisha, East Coast Railway Authorities, Stevedores, Exporters, Importers, Steamer Agents, District Administration, Trustees of the Port, Port Users, Trade Unions along with all the employees and all other stakeholders who are connected directly or indirectly for achieving the outstanding performance.