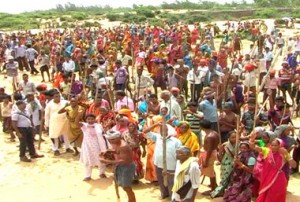 Charges continue to fly thick and fast that the land owners were intimidated and forced upon to give away their betel plots.

Though officials continue to refute the charges, the anti-Posco outfits maintained that democratic rights of people were butchered by corporate-friendly government agencies.

Skeptics tend to believe that taking physical possession of the acquired land would be an uphill task given the fact that those who have been displaced or turned land-losers are still deeply upset with the rehabilitation and resettlement measures.

“The process has come to an end today with the pulling down of 28 betel vines.We have acquired 700 acre forestland in Gobindpur forest areas in the third phase of land acquisition that had started March last,” said Jagatsinghpur Collector, Satya Kumar Mallick.

“Today’s process was peaceful and incident-free though a couple of landowners were reluctant to give away their land.The charges leveled by anti-Posco activists are not true as everything was done with people’s consensus,” Mallick added.

“As the land has been acquired, our foremost job now is to protect it from being encroached upon.Boundary wall work would be taken up.Side by side ancillary work like ground leveling and digging out of trench for project boundary would also begin shortly.”

Sisir Kumar Mahapatra, general secretary of Posco Pratirodh Sangram Samity (PPSS), the outfit that had stalled the project through a strong resistance movement, alleged “the government has played a cruel joke upon people.Using brute force, they have ravaged betel-vines-infested areas.

“Permanent income sources of people here have been virtually snatched away at gun point.We are still hopeful of the project would be grounded as National Green Tribunal has stopped the deforestation activity like tree-cutting,” he observed.