Mores of Indian Art and its Evolving Medium

By Ratnadeep BanerjiArt flows into circles and points, whirligigs of splashes and permeating ideas.Permutations can be figurative or abstract, seminal or a flashback to rankle a perception.Depiction on multifarious mediums gets evocative.The mention of organic fibre sculpture rattlesone’s imagination.But that’s what Mrinalini Mukherjee achieved – entwining with hemp fibres and sisal ropes in a maverick way with expansive areas of vegetation, flora and fauna to bimorphic elements and temple structures.Mrinalini passed away the same week her retrospective took off at the National Gallery of Modern Art, New Delhi.Now it is a tapestry of history circumscribing a father-daughter era.Her father Benod Behari Mukherjee stood the vanguard of contextual modernism who brought the murals into Indian distinction.The father-daughter saga is symptomatic of the Indian art scene spanning nine decades that saw the art locus traverse a trajectory through both time and space.Mrinalini traipsed upon organic fibres to make sculptures and then moved on to hand-modeled ceramics and then to cast bronzes.Peter Nagy, curator of the exhibition at NGMA, New Delhilauds her oeuvre saying, ‘The forms Mukherjee creates in these three materials have a consistency of approach and a recognizable personality, hovering between vegetal, mineral, and humanoid silhouettes, appearing surprisingly fluid in spite of their inert realities’. 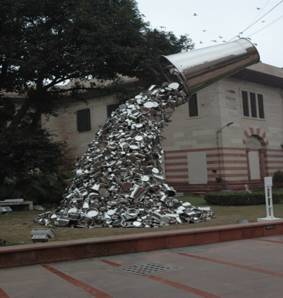 Atul Dodiya’s contemporary art embarks its journey from oil paintings, water colours, shutter installations, sculpture installations and cabinet assemblages.Ranjit Hokote, the curator of Atul Dodiya’s exhibition, ‘Experiments with Truth’ at NGMA comments,’ Dodiya refuses to confine himself to a box neatly labeled with a national identity; rather, his location in India serves him as a base from which to intervene in a variety of cultural and political histories to which the postcolonial self is heir.He has wrestled with the anti-art impulse of Duchamp, assimilated Gerhard Richter’s insistence on the practice of painting, adapted the vernaculars of popular expressive culture that splash themselves across the streets of every Indian metropolis in the form of posters and graffiti, and meditated on the cinematic art of Ingmar Bergman, Andrei Tarkovsky, Michelangelo Antonioni, Ritwik Ghatak and Satyajit Ray.’Subodh Gupta is an artist who melds local with the global.The Director of NGMA, New Delhi,Prof Rajeev Lochan says, ‘His genius lies in being able to metamorphose a familiar everyday object into something that acquires an iconicity.Whether he casts a vigorous banyan tree or a group of milk cans, he can provoke a sense of wonder.The originality of Gupta’s imagination can be observed in the tropes that he uses in his imagery.’ 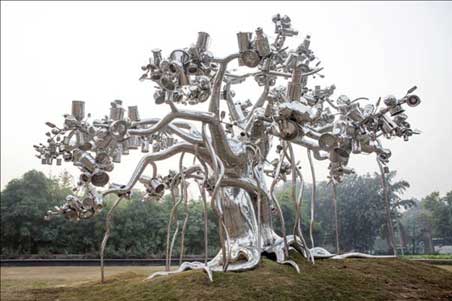 Raqs Media Collective founded in 1992 by Jeebesh Bagchi, Monica Narula and Shuddhabrata Sengupta, put on the rotating roles of artists, curators and peripatetic friars.They create installations, make videos, photographs, print and online works, play with archival traces, make exhibitions and art interventions in public spaces.They exemplify in various paradigms of art.Their exhibition Untimely Calendar was hosted by the National Gallery of Modern Art, New Delhi and its director, Prof Rajeev Lochan hailed the exhibition to be ‘a turning point in the NGMA’s engagement with a new set of creative idioms in contemporary art.Media rich, concept driven, formally multi-faceted, playful, urgent replete with philosophical density – this is the kind of art that addresses all our faculties.’ About the moniker of the exhibition as ‘Untimely Calendar’, Prof Lochan says, ‘Time – how to survive it…Raqs’ practice is founded on a careful consideration of what duration means, of time’s passage and urgency, of what it means to live at different speeds, in and out of time.They approach this question not just with artistic acuity, but also with humour, ethical immediacy and with philosophical depth.’Prof Lochan finds the dynamism of photography to be a significant facet of fine arts “at NGMA we have always endeavored to showcase and promote more museum-quality photographic exhibitions and present the diversity of this medium which remains largely unexplored’.NGMA began collecting photographs as an art form during the late 70’s.Raja Deen Dayal’s photographs of the regal life of the early 20th century Hyderabad forms a coveted collection.The photographs of contemporary India by Raghu Rai and modern cinema by Nemai Ghosh also make up worthwhile sections.The genre laid by Dayanita Singh is a cynosure for people worldwide.NGMA, New Delhi had organized the retrospective exhibition of Raj Rewal, one of India’s most celebrated architects.His milestone works include the Asian Games Village, the Nehru MemorialPavilion, the Library of the Indian Parliament, the National Institute of Immunology, the Lisbon Ismaili Centre in Portugal and the Indian Embassy in Beijing.The exhibition curators, A.G.Krishna Menon and Rahoul B Singh point out, ‘It is ironic that architecture is the least understood of the arts in India: after all, it was once considered the “mother of the arts”.This elision in the public imagination is underscored by the fact this retrospective of Raj Rewal is NGMA’s first ever architecture exhibition….initiates a public dialogue on the postcolonial predicament of Indian architecture: its intellectual history, its contemporary practice and its ongoing struggle for identity’.Anish Kapoor is a name to reckon on using diverse mediums of modernity.This London based Indian artist has met with resounding success in different realms of art – large-scale wax installations, mammoth steel installations, assemblages, resounding success with pigment works among others.NGMA, New Delhi had hosted some of his fantabulous works.His installation ‘Sky Mirror’ of 290 cm diameter, mounted at a 600 angle with the ground proves magical engineering, by turning steel into a silvery salver of sky.This mirror facing upwards appears ephemeral and dynamic due to the ever-changing reflections across its surface.An infinite space falls out.His original Sky Mirror shown in New York and London bears a gargantuan size of 10m diameter perhaps commensurate with the time and space.How does contemporaneity oscillate – back and forth? NGMA holds up a visual storyboard of congealing aesthete, reflection of cognition and projection of behaviour.(The writer is a senior journalist with varied interests, reachable at ratnaub@gmail.com)