Odisha Channel Bureau Bhubaneswar, Sep 19: Crime Branch of Odisha police today arrested seven persons for their alleged involvement in the controversial land scam at Ghangapatna on the outskirts of Bhubaneswar.According to the police, the seven arrested persons include two Additional Tehsildars, one Revenue Inspector, one Record Keeper and three land brokers.More arrests were likely in the case, police sources said. 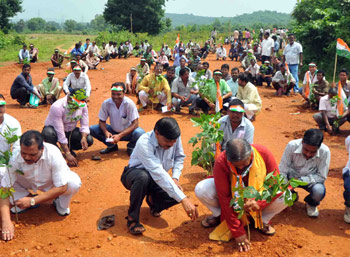 Around 40 persons are involved in the land scam at Ghangapatna, Crime Branch head Bijay Kumar Sharma told journalists after the arrests.The State Government had already retrieved the 76 acres of land that had been fraudulently acquired in Ghangapatna area.Those involved include many leaders of the ruling Biju Janata Dal.Chief Minister Naveen Patnaik had ordered a Crime Branch probe into the land scam after opposition parties demanded that the case be handed over to the Central Bureau of Investigation for investigation.The Government had ordered the suspension of Tehsildar, Additional Tehsildar, Revenue Inspector and Sub-Registrar of the locality before the case was handed over to the Crime Branch.The land scam was first highlighted by the opposition BJP and other parties had joined subsequently for virtually force the State Government order a Crime Branch probe.While the villagers along with BJP activists had demolished the boundary wall constructed around the land that been acquired illegally, Congress activists had planted saplings on the road that was being illegally constructed as an approach way to the encroached land.