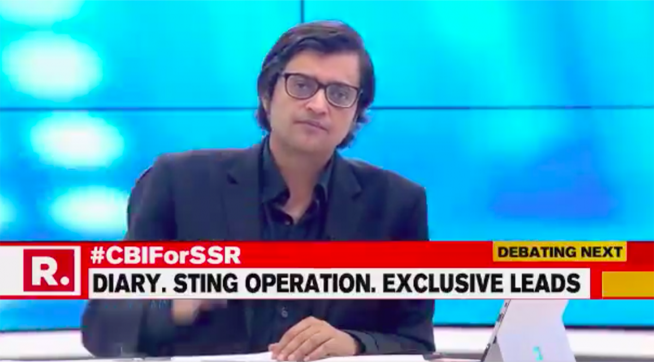 You are not here to inform or make people aware about the flow of socio-political events of our time; rather you are here to tickle the naughty and nasty senses of your viewers. You need a mixed package of romance, violence, fantasy and fakery. It’s like our Bollywood cinema. You need no logic or rationality; you simply need hyperboles and hyper imaginative actions. You need to go by the formula of LSD – Love Sex Aur Dhoka.

Ours is a time of great romance. There was a time when great romance came out of rebellion. Today, it’s romancing with the power and the establishment. Our television channels are so engrossed in romance with Prime Minister Narendra Modi that for them their world is all about Modi. Without Modi their world does not exist.

In a democratic society this is the most poisonous romance. A Prime Minister is elected by a majority, but there remains a larger group who did not vote for him. A democratic form of governance is sustained with checks and balances. Media’s prime duty in a democratic society is to make a fine balance between majority and minority voices. Unfortunately, media of our time has lost basic elements of democracy and has lost on the road of an unethical romance.

Indian media today is the new clown in the Durbar. They sing for the king and curse his opponents. It’s a new royal romance in a democratic stage. Somehow, in romance, sophistication was always a basic ingredient. Here, sophistication is a bad word. You need street fighting. You need rustic use of body language and filthiest of the words to curse the opponent. It’s an open ground of filth and slander. Anchor as journalist comes to the ground to kill the opponent of his/her master with masterly punches. We live in an era where journalism is more violent than a bull fight; a coliseum where democracy is thrown into the face of a hungry lion.

So, we have great entertainers and gladiators as anchors. They are free media. Free to kill anyone’s privacy. Free to judge any one for anything. Free to brand someone an anti-national and to set up a trial of their own. Free to wipe out the voice of opposition and minority concerns. Free to target powerless and vulnerable. Free to abuse and mock. Yes, it’s absolute freedom of slaughtering democracy and the spirit of the Constitution.

The best part of the story is that, vulgarism sales. Today, Arnab Goswami’s Republic TV and Republic Bharat stand as viewers’ first choice. He is the symbol of success in our time. Arnab brand of journalism teaches us one thing, to remain in the top of the business, go down to any level of the vulgarity.

Ethical journalism, democracy, spirit of Constitution, free speech, political impartiality, social change – all these are mere words! Nothing works in journalism except a romance with the power. It’s a duel, a Dangal, a poisonous romance!!

The writer is a poet, author and art critic.