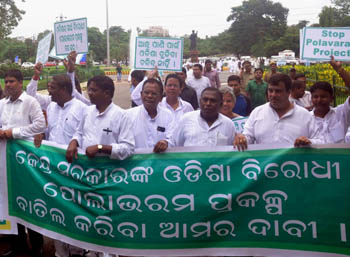 Odisha Channel Bureau Bhubaneswar, July 14: Almost all the leaders of Biju Janata Dal headed by Chief Minister Naveen Patnaik were on Monday busy opposing construction of the multi-purpose Polavaram dam project in Andhra Pradesh.While the party workers and leaders were busy observing a dawn to dusk hartal in Malkangiri, Koraput, Narabangpur and Rayagada to oppose the project apprehending that many tribal people will be displaced in Malkangiri district, the party’s MPs were busy opposing the Polavaram Bill in Parliament as party legislators disrupted the proceedings in the State Assembly.As the BJD workers staged dharna in front of Central government offices at several places in the four districts where a hartal was observed, shops and other business establishments remained closed in the region during the day.The party legislators, who stalled the proceedings of the Assembly in protest against the manner in which the Bill was being passed in Parliament to facilitate construction of the irrigation project, submitted a memorandum to Governor S.C.Jamir demanding that the Centre should revise the project design to prevent submergence of many villages in Malkangiri district.Meanwhile, opposition Congress and BJP blamed the BJD for attempting to draw political benefits by organising protests against the Polavaram project.