A dying river crying for attention 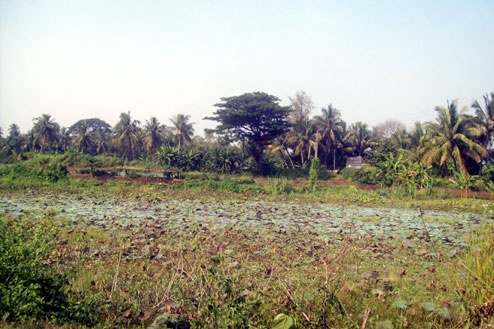 Odisha Channel Bureau Jagatsinghpur, Dec 6: Unabated human activity has led to a swirling river in Odisha’s Jagatsinghpur district ‘die young’.The free-flowing river Alaka which was once the lifeline of several thickly populated human settlements wears poor shadow of its glorious past, reduced to narrow patch of drainage basin.People’s movement to revive the dying river has picked up tempo in river-side human habitation areas even as encroachments along river banks continue to remain a major cause of concern.As the river which is a lifeline for large number of thickly-populated villages in Biridi, Jagatsinghpur, Naugaon, Balikuda and Erasama blocks has been severely depleted in shape and size, people’s movement to revive it its older form is gaining momentum. The river originating as a tributary of Kathjodi River from Birabarpatana in Biridi block is squeezed to a form of truncated canal as it meanders through Balikuda block.“The river has died young and the government agencies are to be squarely blamed for the sorry state of affairs of Alaka River,” commented Ratnakar Nayak, secretary of Save Alaka Campaign, a people’s outfit espousing the cause of revival of the dying river. Unlawful structures along river banks flourish, impeding the unhindered flow of the river.Constructions of check dams, arrest of sewer lines and clearing of encroachments would have a gone a long way in protecting the river.But the water resources department has closed its eyes to it.The insensitive attitude of authorities concerned us to move the Orissa high court seeking remedial measures.Responding to our public interest litigation, high court has issued show cause notices to the state government, the outfit’s president Susanta Mohapatra informed.The river used to be wider earlier.Now it is decimated and it looks like a drain.There have been unabated encroachments that have paved the way to the prevailing mess.The river has got bifurcated near Nailo village in Balikuda block.The Cuttack-Machagaon irrigation canal has posed stumbling blocks for downstream flow of the river.Historically, the river was the primary medium through which maritime trade was conducted.It dates back to British Raj.The grabbers who include government agencies have occupied the riverbanks over the years, turning it into a narrow canal these days.Such illegal structures have clogged 40-km stretch of the river in such a way that its breadth has been reduced to less than15 feet in majority areas where it traverses through.During the sixties, its width was around 100 feet.It’s a classic case what human interference could do to nature, Mohapatra narrated.Spurt in construction of river bridges, unabated sand quarrying activity besides unlawful brick kilns operation along the major river banks have all contributed to topographical change of the river.The water carrying capacity of a river reduces once it enters the plains.As long as human interference with the course of a river is minimal, rivers are not susceptible to changing course.As habitations crowd flood plains and flood control embankments and road connectivity river bridges come up, rivers change course.Besides the river beds are getting progressively shallower due to siltation, further restricting their water carrying capacity, said water rights activist Tapan Padhi.The revival of the ‘dead’ river holds the key to agro-based economy of the region.Besides there is immense scope for pisciculture growth if the river is brought back to former self.Jagatsinghpur Collector Satya Kumar Mallik said “the district administration is intent on the revival of the Alaka River.The water resources department has been asked to draw up a blueprint in this regard.The department has already spent funds in this regard for weed clearance from the river in specific patches”.