Odisha Channel Bureau
Bhubaneswar: Amlan Borgohain, who produced a spectacular run at the National Open Athletics in Warangal last year in the 200m to win gold, is taking impressive strides forward in the 100m sprint as well.

The 23-year old, who has made rapid progress since he started training at the Reliance Foundation Odisha High Performance Centre (HPC) at the Kalinga Stadium in Bhubaneswar in 2019, clinched silver at the 81st All India Inter-University Athletics Championship for Men in Mangalore in the 100m earlier this month, producing timings of 10.58, 10.55 and 10.50 seconds in his three races over the competition. 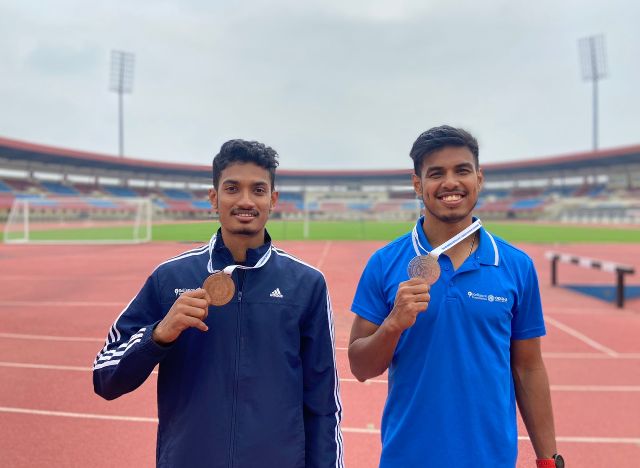 While saying he was pleased with his ward’s performance, James Hillier, Head Coach at the Reliance Foundation Odisha HPC, explained that it was too early in the season for athletes to be producing their best timings.

“We are still in a general preparation phase and have only been training for eight weeks so this was always going to be more of a competition that we took in our stride rather than something we specifically targeted,” says Hillier.

“Amlan made a couple of errors in the final that ultimately cost him the gold but I’m sure he has learnt from his mistakes and he will be a better athlete from it.”

Borgohain’s sensational performance at the Open Nationals, where besides decimating the field in the 200m with Personal Best (PB) timing of 20.75 seconds, he also won silver in the 100m with yet another PB of 10.34 seconds, has catapulted him into the national spotlight. With high profile events such as the Commonwealth and Asian Games scheduled for later this year, Borgohain is focused on being in peak shape to put his best foot forward at those competitions.

The coaching staff and support teams have identified critical interventions needed to ensure he arrives at these competitions with the best preparation possible.

Of immediate interest to Borgohain though are the World University Games in China in June that he appears to have done enough to qualify for. The All India Inter-University Athletics Championship in Mangalore served as a trial for that event.

“I have been focusing on him trying to lose a little bit of weight whilst maintaining his strength,” explains Hillier. “We have been doing that by meticulously monitoring his food intake to ensure that he is not over-fuelled for training. We are just trying to improve everything a little bit. My job this year is to keep his feet firmly on the ground and I need to keep reminding him how he got from a complete unknown athlete to this position in the first place.”

Besides Borgohain, 20-year old Swadhin Majhi’s bronze in the High Jump with a first time clearance of 2.08m and 18-year old Nikhil Das’ PB of 1.95m in the same event at his first national level competition were the other performances that gave Hillier reasons to be enthused for the rest of the year.

Majhi, in particular, oozed confidence throughout his competition and may have returned with an even better effort if not for an ankle injury sustained during his first attempt at 2.11m. Based on his observations at the meet in Mangalore, Hillier has identified some technical aspects for Majhi, who hails from Angul in Odisha, to improve his performance further.

“With Swadhin, I have been focusing on his body positions in the run up and particularly in the last three strides,” he explains. “I feel that he is not setting up the jump optimally yet. He is improving but these technical changes take time and a huge amount of buy in from the athletes.”

Although training programs are having to be modified due to COVID induced restrictions, Hillier is eager to ensure his athletes do not get bogged down and keep their mind healthy through this challenging period. He is convinced more athletes from the Reliance Foundation Odisha HPC will produce impressive results in 2022.