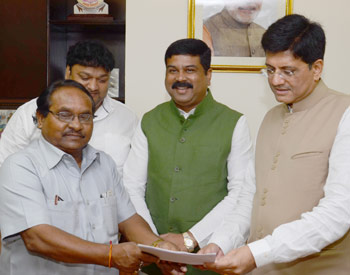 Odisha Channel Bureau Bhubaneswar, Sept 4: Transport related problems in Odisha’s coal belt was taken up by Union Minister for Oil and Natural Gas Dharmendra Pradhan with his Power, Coal and New and Renewable Energy counterpart Piyush Goyal in New Delhi on Friday.During the discussion Pradhan conveyed the problems that the coal transporters are facing in Odisha’s mineral rich belt of Talcher, Sundergarh and Brajrajnagar.Pradhan said that a large number trucks and trolleys operate in the area, which is engaged in the transportation and evacuation of minerals in the region.These operations are mostly owned by the project affected people who have been displaced due to operations of the PSUs, he said.However, due to many shortcomings they are facing lot of hardships as their problems are not attended by appropriate authorities, Pradhan added. Goyal assured to look into the issues concerning the transport sector engaged in evacuation and transportation of coal in Odisha, according to an official release.