MoU signed for evacuation of coal

Odisha Channel Bureau New Delhi, April 20: A memorandum of understanding (MOU) today was signed among Ministry of Railways, Ministry of Coal and Government of Odisha for development of rail infrastructure for evacuation of coal through formation of a Joint Venture (JV) to undertake project development, financing and implementation of identified projects here today.The three parties will participate in the equity on its own or through its Public Sector Undertakings (PSUs) as nominated,  according to an official release.The signatories to the MoU were A.K.Dubey, Additional Secretary Ministry of Coal, Sunil Kumar Bhargava, Chief Resident Commissioner, Government of Odisha and Girish Pillai Advisor (Infrastructure) Railway Board. 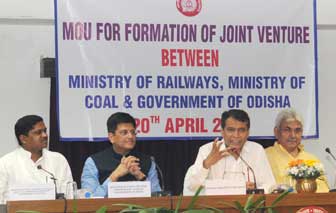 The MoU was signed in the presence of Minister of Railways Suresh Prabhakar Prabhu, Minister of State (Independent Charge) for Power, Coal and New & Renewable Energy Piyush Goyal, Minister of State for Railways Manoj Sinha and Minister of State Transport (Independent Charge) for Commerce and, Government of Odisha Ramesh Chandra Majhi also present on the occasion.In his address, Prabhu said that coal freight is the most important component of revenue generation of the Railways.Coal is poor man fuel and it is utmost important for us to increase coal production in the country.He said that in the days to come, the Railways Ministry will work out similar partnerships with all stakeholders and set up Joint Ventures to bring out synergy of operations.While complimenting the officers of Ministries of Railways, Coal and Odisha Government for taking such revolutionary step, Goyal said that this is win-win partnership for all stakeholders.“Launching of Joint Venture is a historic moment towards our efforts to reach 24×7 power to every home , for the expeditious industrial growth in the country , for economic development in double digit and to bring about change in the way government departments work and to expand opportunities for progress in the Eastern Region,” Goyal added.Speaking on the occasion, Sinha said that signing of MoU is a landmark step being taken after success of similar two projects in Chhattisgarh.He said that this is a step in the direction of implementing the proposal of Railway Budget.Majhi also spoke on the occasion and said that State Government will ensure sustainable developments of all projects being implemented in the State.The following projects important for coal connectivity will be taken up for development, financing and implementation; Brundamal-Jharsuguda-Fly-over connection for joining down line (6.6 km); Sambalpur-Talcher doubling (174 km);Sambalpur-Titlagarh doubling (182 km); Raipur-Titlagarh doubling (203 km); Champa-Jharsuguda- 3rd line (165km); Coal sidings; and other coal evacuation projects in State of Odisha,The development of the corridors shall be implemented either through the proposed JV or through a separate project specific Joint Venture Companies (JVCs) /SPVs, as per IR standards.Critical coal sidings will be fully funded by the respective coal companies.   The doubling/3rd line/Traffic Facility projects, which have a close interface with the existing IR network, shall be implemented by Indian Railways with possible funding by JV/JVCs through an appropriate mechanism as mutually agreed.The JV will have an authorized share capital of Rs.1000 crore with initial paid-up capital of Rs.50 crore.Board of Directors (BoD) of the JV shall have part-time, full time and independent directors as per extant provisions.Chairman of the Board shall be from the Ministry of Coal.The JV/JVCs shall enter into separate project specific concession agreement with MoR.Acquisition of land required for the project shall be done by JV/JVCs.  Entire costs of the land shall be borne by the JV/JVCs.The JV/JVCs shall also be responsible for payment of the compensation of the land and also implementation of the Rehabilitation plan as per Rehabilitation Policy of the State Government.  However, the Doubling/3rd line/4th line/Traffic facilities works, land, if required will be acquired by IR at its cost.Government of Odisha shall facilitate in completing the process of land acquisition and environmental / forest clearance(s) for the Projects as required.The construction work of the railway lines shall be undertaken only after process of land acquisition and environmental / forest clearance(s) have been completed, and financial closure has been achieved.Ministry of Railways, Ministry of Coal and Government of Odisha shall provide the requisite statutory support wherever required to the JV/JVCs to ensure expeditious completion and commissioning of the projects.JV/JVCs at its own cost will carry out preliminary activities like final location, survey of alignment (survey and investigations etc.), preparation of feasibility/ bankability report to establish the project cost, alignment, requirement of land acquisition/ rehabilitation, resettlement, other project related requirements and viability of the projects.JV/JVCs shall enter into separate project specific operational agreements with MoR for the operation and maintenance of the assets.JV/JVCs may take employees on deputation basis and can recruit employee on contractual basis.Chief Executive Officer of the JV shall be an officer preferably with Railway/ Infrastructure background, and each Party shall nominate at least one representative and a Nodal officer for implementation of this MOU.