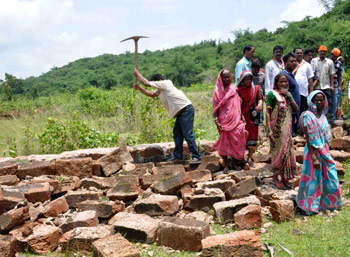 Odisha Channel Bureau Bhubaneswar, Sep 18: After admitting that 76 acres of land had been fraudulently acquired by influential people following public outcry, the Naveen Patnaik Government has succeeded in recovering the land in Ghangapatna area located on the outskirts of Bhubaneswar.The State Government has recovered 76 acres of land which were found to be under doubtful possession by many people, Revenue Minister Bijayshree Routray has said.Of the 76 acres of land retrieved by the Revenue Department in Ghangapatna area includes seven acres of Nivriti Export Private Limited, a company that is headed by BJP State president Kanak Vardhan Singh Deo’s daughter, and five acres of Gokarneswar Charitable Trust, which is managed by BJP Rajya Sabha Member Kalpataru Das’ legislator son Pranab Balabantaray.The land that was acquired by Gokarneswar Charitable Trust was later sold to a real estate company that is allegedly managed by the BJD leader’s family members.Routray has not been able to reveal the complete list of encroachers.A road was also being constructed on government land to link the encroached land to the main road in Ghangapatna area.The government is yet to take any action against those who had allocated funds for the illegal road.Action against the encroachers was likely as Crime Branch of the State police is investigating into the Ghangapatna land scam.Coming under serious criticism in the wake of the unearthing of the land scam, the State Government has already announced to bring new laws to prevent encroachment of government land in the State.