Dussehra celebrated in Odisha with fervour 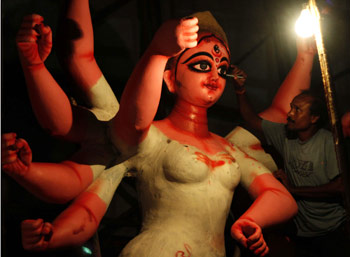 Odisha Channel Bureau Bhubaneswar, Oct 4: Dussehra was celebrated with fervour and gaiety across Odisha on Saturday as the annual Durga Puja celebrations came to an end with the burning of effigies of Ravana near innumerable Puja pandals in the evening hours.Heavy police arrangements were made and hundreds of police personnel were deployed near the Puja pandals to control the crowd when burning of the effigies began at different locations in the evening.The burning of effigies were likely to continue till midnight at many places as the effigies were to be set on fire at the end of cultural programmes and bursting of fire crackers worth lakhs of rupees.In Bhubaneswar, large number of people gathered to witness the Ravana Podi at Saheed Nagar, Nayapalli, Rasulgarh, Jharpara and other locations.Similar was the crowd at many locations in neighbouring Cuttack city where millions of people enjoyed the five-day-long Durga Puja by visiting the pandals across the city.The burning of effigies of Ravana added colours to the annual Puja celebrations in the city were delayed due to rains in the evening.The process of burning of the effigies of Ravana was to be done at midnight at Bali Yatra Ground of the city.The immersion of the idols of Goddess Durga started in Cuttack by late on Saturday night.The immersion of Goddess Durga was scheduled to end by 7 am on Monday.A procession of the idols was to be taken for immersion in Bhubaneswar on Sunday.The procession was to start from Sheed Nagar and end by night at Kuakhai river on the outskirts of the Capital city.