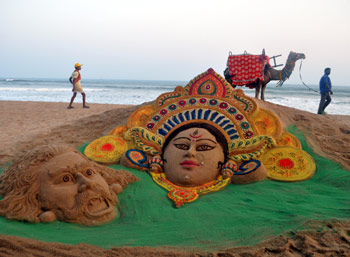 Odisha Channel Bureau Bhubaneswar, Sep 30: Durga Puja, which symbolises the commemoration of good over evil, began across Odisha on the occasion of Mahashasthi on Tuesday.Mahashasthi marks unveiling the face of Goddess Durga.Belabaran ritual is performed before the commencement of the Puja that precedes Chakshyu Daan, Amantran and Adhibas.These rituals are being performed at hundreds of puja pandals in Cuttack, Bhubaneswar, Berhampur, Sambalpur, Rourkela, Puri, and many other towns as well as rural areas marking the arrival of Goddess Durga.Adequate security arrangements have been made by the local police across the State to make the Durga Puja celebrations incident-free by proper crowd and traffic control.As the organisers of the Durga Puja were all prepared to organise melody nights and Bhajan sessions involving popular singers, many of the pandals in Cuttack and Bhubaneswar in the shape of replicas of historic monuments, temples and palaces were ready to offer a visual treat to the people at large.In the Millennium city of Cuttack, the pandals were made as replicas of Taj Mahal, Charminar, Victoria Memorial, Qutub Minar, Akshardham Temple and Meenakshi Temple. Similarly, the Capital city of Bhubaneswar had puja pandals as replicas of many palaces and temples.In Cuttack, the number of Chandi Medha or tableau made of silver has increased to 18 this year with quintals of silver worth crores of rupees used by the puja committees.At many places the idols have gold crowns too.After three days of puja on Mahasaptami, Mahaastami and Mahanabami, Goddess Durga will be given a tearful farewell on Bijaya Dashami on dussehra on Saturday.This year’s Durga puja was set to be a grand celebration for many as there were several holidays during the period.The dussehra celebrations on Saturday will mark the burning of the effigies of Ravana in the evening at several locations across the State.