Odisha Channel Bureau Bhubaneswar, Oct 11: As both Odisha and Andhra Pradesh remained prepared, the National Crisis Management Committee (NCMC) met again in New Delhi on Saturday under the Chairmanship of the Cabinet Secretary Ajit Seth and reviewed the preparedness for relief and rescue operations in the wake of the cyclonic storm ‘Hudhud’ advancing towards the coastal areas of Andhra Pradesh and Odisha.The Cabinet Secretary also took stock of the relief and rescue measures put in place in the Andhra Pradesh and Odisha after discussing the same with the Chief Secretaries of the States. 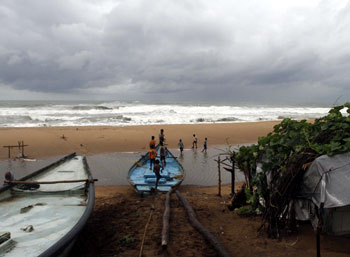 All the central agencies are fully geared up to provide necessary assistance to these States in case of any eventualities arising out of the landfall of the cyclone expected on Sunday, according to a release issued by the Press Information Bureau (PIB).A total of 39 NDRF teams comprising of more than 1680 rescuers along with 199 inflatable rubber boats and other life saving equipments are deployed in various parts of Andhra Pradesh and Odisha to meet any challenges arising due to cyclonic storm.The Indian Air Force helicopters are also on standby to meet any emergent situation.