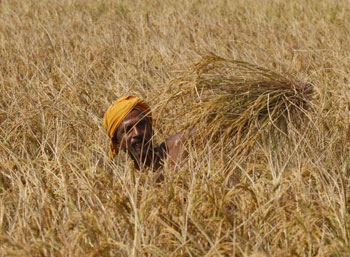 Odisha Channel Bureau Bhubaneswar, Dec 12: Taking note of media reports that thousands of farmers were facing a series of hurdles in selling their paddy, Chief Minister Naveen Patnaik on Friday directed the officials concerned to take immediate measures for speedy procurement of paddy in the State.Patnaik issued the direction after he chaired a meeting to review paddy procurement and snags in the online payment system at the paddy procurement centres in several districts at the State Secretariat here.The Chief Minister directed the officials of the Food Supplies & Consumer Welfare Department to make immediate online payments to farmers for the paddy procured from them.In the event of snags in the online system, Patnaik ordered that payments should be immediately done through cheques.Media reports over the past few days indicated that farmers were not able to sale their paddy despite bringing their produce to the procurement centres even three weeks ago.Odisha Government has fixed a target to procure 30 lakh tonnes of paddy during the current Kharif season and 17 lakh tonnes would be procured in the first phase.According to official sources, while procurement is in progress in full swing in the districts such as Bargarh, Sambalpur, Balangir, Rayagada and Keonjhar, the process has started in Kalahandi, Subarnapur, Boudh and Mayurbhanj.The procurement of paddy will start in the districts of Khurda, Kendrapara and Jagatsinghpur in January.The farmers in most parts of Odisha are expecting a good harvest of paddy this season, but the government’s failure to procure their produce has left them distressed.While the State Civil Supplies Corporation had procured only 1.72 lakh tonnes of paddy till Friday, no other agency had started procurement of paddy so far, according to an official release issued by the Chief Minister’s Office.At many places the rice mills owners were not extending their cooperation thereby putting the government agencies in great difficulty in procuring paddy.While directing government officials to make surprise visit to procurement centre, the Chief Minister has ordered that action be taken against the erring rice mill owners.