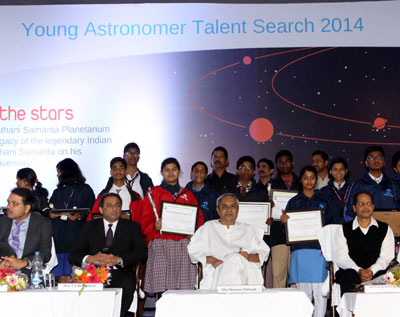 Odisha Channel Bureau Bhubaneswar, Dec 14: A six-month-long exercise to identify 20 most promising young astronomers in Odisha held under the aegis of the Young Astronomer Talent Search (YATS) programme organised by Tata Steel, in collaboration with Pathani Samanta Planetarium, concluded here on Saturday.Odisha Chief Minister Naveen Patnaik gave away trophies and certificates to the top 20 students at a grand ceremony organised at the Pathani Samanta Planetarium, Bhubaneswar on the occasion of 179th birth anniversary of Mahamahopadhyay Chandrasekhar Singhsamant Harichandan Mahapatra, popularly known as Pathani Samanta, the legendary astronomer of Odisha.Pradeep Kumar Panigrahy, Minister, Science & Technology, Higher Education, Rural Development (Rural Water Supply), Government of Odisha , MP Prasanna Patsani, Surendra Kumar, Commissioner-cum-Secretary, Science & Technology Department, Government of Odisha and T.V.Narendran, MD, Tata Steel, India and SEA, Arun Mishra, VP, Gopalpur Project, Tata Steel were present on the occasion. Tata Steel will take the winners to Indian Space Research Organisation-ISRO facility in Bangalore for a tour around May, 2015 where they will have the opportunity to interact with the senior scientists of ISRO.Speaking on the occasion, Patnaik commended Tata Steel and Pathani Samanta Planetarium for jointly organising the YATS programme and informed that with a view to increase the outreach of astronomy in rural areas, the government is going to provide two mobile planetariums and also establish a museum in Khandapada, the birth place of late Pathani Samanta, in his honour.YATS is a remarkable initiative aiming to fire up the imagination of young talents who are interested in astronomy and space sciences said Narendran while addressing the gathering.Our association with the YATS programme is one of the many initiatives by which Tata Steel contributes to the holistic growth of the society in Odisha, he added.Patsani spoke at length about the contribution of Pathani Samanta.Both Panigrahy and Kumar congratulated the students and urged them to pursue science more seriously.To popularise the contributions of the legendary Pathani Samanta in the field of astronomy and to encourage the young talents in astronomy and space science among school students, Tata Steel, in collaboration with Pathani Samanta Planetarium, has been organising YATS since 2007 touching around 6000 students, informed Arun Misra, Vice President, Gopalpur Project, Tata Steel, while delivering welcome address at the meeting.William Bilung, Director, Pathani Samanta Planetarium and Additional Secretary, S & T Department Government of Odisha introduced the concept of YATS to the audience and Subhendu Pattnaik, Deputy Director of the planetarium gave vote of thanks.There was a large gathering of students, teachers, parents and media persons at the function.The competition was open to students of Standard VIII to X in schools across the State.It was conducted in three stages at eight different zones – Belpahar, Keonjhar, Balasore, Joda, Jajpur, Bhubaneswar, Berhampur and Jeypore.In the first stage, the participating students were asked to prepare a write-up on ‘My Manned Mission to Space”.After the zonal rounds, where they presented various models on the theme, 106 students from 62 schools across the State were selected for the final round that was held at the Pathani Samanta Planetarium on December 12 and 13 and the top 20 were selected by a panel of judges.