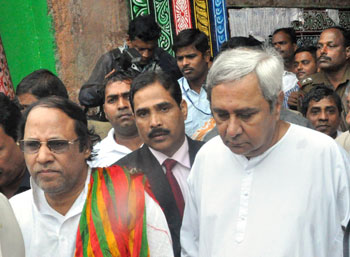 Odisha Channel Bureau Bhubaneswar, Jan 1: As most parts of Odisha continued to experience rain since Wednesday, the New Year’s celebrations were badly affected on Thursday as many people were forced to stay indoors due to bad weather.Inclement weather due to a well marked low pressure over the Bay of Bengal had also badly affected the New Year Eve festivities on Wednesday.The prominent politicians, however, were found to be enjoying the New Year Day without much hitch with their party men queuing up at their homes to greet them with flower bouquets.As in the past years, Chief Minister Naveen Patnaik visited Sri Jagannath temple in Puri to offer his prayers and seek the Lord’s blessings on the occasion on the New Year’s Day. There was no celebration of the New Year in Sambalpur city in western Odisha as people decided not to celebrate due to spread of jaundice in their town.While more than 20 persons had died of jaundice , more than 2000 people had been affected by the disease so far.Rain was likely to continue for two more in many areas of Odisha, according to the Bhubaneswar Meteorological Centre.