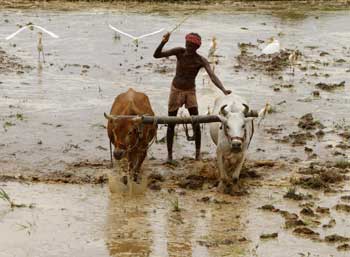 The survivor Fakir Chandra Jena (56) undergoing treatment at a government-run hospital recalls the harrowing experience and thanks God for a new lease of life.Jena who was ploughing his agriculture field in Endulapur village under Rajkanika police station limits was attacked by a giant crocodile during wee hours today.However, he managed to survive following a fight with the attacker.We have been told by the villagers that the survivor displayed courage when it mattered most.He deserves praise for the brave act, said forest officials.“The attack was so sudden that I had little time to react.The agriculture implements that I was carrying saved me from dying,” Jena, who is stated to be out of danger by hospital doctors, recalled.It was a miraculous escape.The reptile pounced on me and dragged me to water.I was about to completely dragged into a nearby water-body when I hit the croc on its forehead and eye by a sickle.The strike paid dividend.The animal slowly released me from its grip.The crocodile was furious and must be above 9 foot long, he recalled remembered.“I acted on the spur of the moment as I had taken it for granted that the animal would kill me,” he narrated.The latest crocodile attack occurred outside the national park limits.The state forest department would bear the cost of treatment of the man injured following croc attack.Besides the department would also award compensation sum to the injured person’s family as per revised rules, said Divisional Forest Officer, Rajnagar Mangrove (wildlife) forest division, Bimal Prasanna Acharya.Since past two months, man-crocodile conflict has reached alarming proportions in villages lying in close periphery of the Bhitarkanika national park.The crocs have claimed two human lives while injuring at least seven others while a body of a crocodile at Khola ferry ghat near the park.Forest personnel however are of the view that people are exposing themselves to croc attack by venturing into croc-infested water bodies.“The forest department has initiated a series of measures to save human and domesticated animals’ lives from preying crocs.Over a two dozen of riverside spots were identified as danger zones because of frequent sighting of reptiles in these places.Warning has been issued to people to avoid these troubled water zones.The bathing ghats which have become vulnerable due to croc intrusion have been barricaded,” said officials.