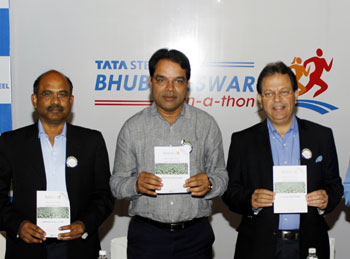 Odisha Channel Bureau Bhubaneswar, Feb 5: Tata Steel has announced to organise a run-a-thon in Odisha titled `Tata Steel Bhubaneswar Run-a-thon which will be held for the first time at the State capital on February 15.The participants are required to run 10 km, which is the internationally approved distance for road races by International Association of Athletics Federations (IAAF).For the Runathon, Tata Steel and its Sports Department will get internationally recognised technology and tracking mechanisms for the first time in Odisha, thus enabling the runners to have a professional sporting experience.Arun Misra, Vice President, Gopalpur Project, Tata Steel unveiled the logo and website of Tata Steel Bhubaneswar Run-a-thon and formally launched it.Giving details on the Run-a-thon, Farzan Heerjee, Chief, Guest Relations and Sports, Tata Steel informed that apart from the 10 km run which is open to all, there will be a 7 km run for corporates and institutions, a 5 km run for school children and a 3 km race for differently-abled persons.The reporting time for all races will be 5.30 am.The run, starting from Kalinga stadium will go up to Tanishq showroom at Chandrasekharpur, take a u-turn from there and end at the Kalinga stadium.The runners will be given smart RFID (Radio Frequency Identification) chips to track the participants’ performance and location.There will be awards in 5 different categories with the highest prize money of Rs 51,000.00 going to the winner of the 10 km run.There will be separate registration fee for corporates and institutes and individual participants.Registrations can be done online at www.tatasteelbhubaneswarrun.com or at the registration counters at Kalinga stadium from 10:00 am to 5:00 pm, starting February 5, 2015.The last date for registrations is February 11, 2015.The goodies bag, containing a t-shirt, an information leaflet, a bib number unique to each participant and RFID chip, can be collected from February 12 onwards from the designated counter at Kalinga Stadium.Each person who registers for the event will receive a badge of the event and an SMS and email confirming the registration.This is the third in the series of the popular athletic events in Eastern India after Tata Steel Kolkata Marathon and Tata Steel Jamshedpur Run-a-thon held in December last year.Tata Steel is committed to develop this initiative into a key sporting event in Bhubaneswar in the years to come, according to the company officials.