Odisha Channel Bureau Angul, Aug 2: In a tragic mishap, three young engineers working in a private steel plant here were drowned in a tank at village Mahitala under Nisha police station near here on Saturday night. 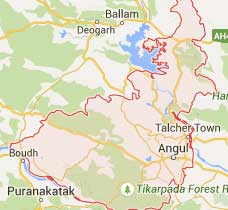 The deceased were Sameer Nigam (27) from Utter Pradesh, Avtar Singh Saroya (25) from Punjab and Manoj Yadav (31) from Rajasthan, according to police.Angul Sub Divisional police officer (SDPO) Rabindra Nath Deo said four engineers had gone to a spot near Mahitala tank for a feast, around three km away from their workplace.At about 2 am one of the engineers Aved Kasam (30) who survived the mishap left the spot leaving those three to follow.“As he proceeded, his motorcycle broke down and he returned to spot where his friends were there.He did not find them there and on search he located their shoes near the tank.He then alerted police and the company security guard.Nisha police rushed to spot and after a great effort the bodies were fished out in early this morning today,” Deo added.The bodies were taken to Angul hospital where the post mortem was held.The bodies were kept for the arrival of their family members.Nisha police have registered three cases of unnatural death in this connection.