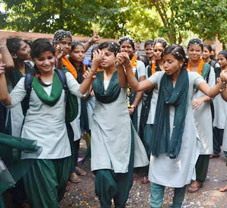 Odisha Channel Bureau Bhubaneswar, Sep 29: Polling began in colleges and universities across Odisha for the students’ union elections on Monday amid tight security arrangements.The process of polling started at 8 am with boys and girls casting their votes in favour of the candidates of their choice.The voting will continue till 2 pm.The elections are being held in a total of 1000 junior colleges, 623 Plus III colleges and seven universities.More than nine lakh students are scheduled to participate in the elections.The counting of votes will be undertaken after polling ends and the results of the elections will be declared by evening.Polling was not being held in a few colleges such as BJB Plus-III College and Ekamra College in Bhubaneswar and Angul college where elections have been cancelled due to violence on the campus.While the college authorities have been adequate arrangements to conduct polling, the police administration has deployed security personnel in all the campuses where elections are being held.All the major political parties have extended their support to the panel of candidates they are supporting in an attempt to strengthen their presence among the youths.The newly elected students’ union representatives would take oath on Tuesday since the colleges would be closed on account of Dussehra holidays from Wednesday.