Devadasi Sasimani Devi is no more

Odisha Channel Bureau Puri, Mar 19: Sasimani Devi, the last surviving Devadasi of Lord Jagannath temple in Puri, is no more.Sasimani(92), who was ailing for some time, breathed her last this afternoon at the residence of her foster son Somanath Panda in Dolamandap Sahi. 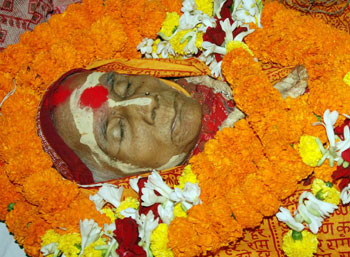 She breathed her last at 5.10 pm.Many of her students paid their tributes while her mortal remains were consigned to flames at the Swargadwar crematorium after the holy fire was released from the temple kitchen.As per temple tradition, servitors of the temple get the holy fire to ignite the funeral pyre at the Swargadwar.Her body was later taken for cremation at Swargadwar.Considered the human wife of Lord Jagannath, having been married to the deity at a tender age, Sasimani Devi lived the life of a celibate.She was reportedly inducted as a Devadasi at the age of 12 years.In her young days she used to dance before the Lord during Badasimhar Vesha while the deities goes to sleep in the night and in other temple festivals like Chandan Yatra.Later in her old age her service was confined to reciting Geetgobinda only“Everybody would have been happy she would have survived to see witness the Nabakalebara of Lord Jagannath later this year,” said Arvind Padhee, Secretary of Tourism and Culture, Government of Odisha.Devadasi tradition comes to endSince Devadasis maintain celibacy, Sasimani she had no children.As per the tradition to continue the Devadasi Seva a Devadasi has to adopt a young girl and train her in dance and religious songs before she was commissioned into the job.The Devadasi service came to an end with the demise of Sasimani as she had not adopted a girl.