Odisha Channel Bureau Bhubaneswar, May 14: JSPL Foundation, which spearheads the Corporate Social Responsibility (CSR) initiatives of Jindal Steel and Power Limited (JSPL), today felicitated 20 individuals and 9 self-help groups from Angul, Barbil and Tensa districts of Odisha, with the first-ever Swayamsiddh Samman in recognition of their exemplary courage, commitment and confidence that has enabled them to overcome adversities and create a unique identity of their own, making them a source of inspiration for many in India. 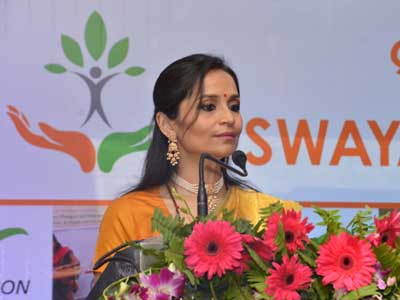 These Ambassadors will pan out in other parts of Odisha and the country to work for the upliftment of the underprivileged and through their experience and hardships guide others to achieve their dreams.The awardees were felicitated by Shallu Jindal, co-chairperson of JSPL Foundation at a glittering function held here.Senior CSR officials of the company were also present on the occasion The awards ceremony began with five students from the Adrut Children’s Home in Angul giving a beautiful Oriya rendition of the Vande Mataram.The 29 Ambassadors have been chosen from every major CSR initiative that the JSPL Foundation organises in Angul, Barbil and Tensa.They are Balikram Munda (entrepreneurship); Bari Pradhan (adolescent healthcare); Bijay Behera (pottery); Chittaranjan Samant (teaching); Geeta Munda (business); Hemanta Kumar Sahu (fitter); Magdal Purty (middle school teacher); Philicita Toppo (nursery teacher); Namrata Pradhan (entrepreneur) and Pradeep Sahu (mushroom farming).Other awardees include Rajanibala (transport); Rily Majhi (dairy farming); Santosh Nayak (commercial vehicles); Santosh Prasad (mechanic); Sansar Sahu and Banabihari Sahu (entrepreneurship); Sarbeswar Sahu (organic farming); Shushree Lipali (scholarship); Sumati Behera (tailoring) and Sushant Tripathy (livelihood).The awardees were shortlisted on the basis their contribution to the particular initiative that they have been a part of, how they have taken it forward and how it has changed their lives.Leadership qualities and the ability to work in a team coupled with their strategies for the future are other parameters on which they were identified.“The idea of holding such awards was to recognize and nurture talent at the grassroots level.The 20 awardees will become Ambassadors of the JSPL Foundation inspiring others and also going to different areas in Odisha and other parts of the country to help and guide people who are in similar situations,” said Shallu Jindal.Most of the awardees have great inspirational stories to tell on how they have been able to make a mark for themselves against all odds.