Rajkumar MohantyPuri, May 22: It was almost a Rath Yatra as over five lakh devotees witnessed and participated in the pulling of the Daru Sagadi of Lord Jagannath along the Badadanda as the Sagadi resumed its journey to Koili Baikuntha this morning from Nrusingha temple situated on the back side of the Sri Gundicha temple.A devotee from Uttar Pradesh, Vivek Singh was injured in a near stampede situation while the additional superintendent of police Jagannath Pradhan sustained injury. 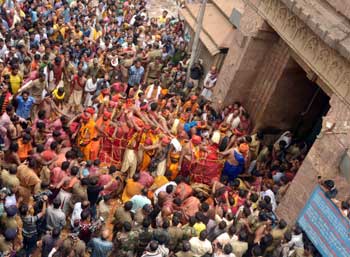 Earlier on the Thursday midnight the Daru Sagadi of Lord Jagannath reached the Nrusingha temple and the Banajag team rested there for the night.Today after the ceremonial Ajnamallya was brought to the Banajag team by the temple priests inviting them to the temple the pulling of the Daru Sagadi begun amid tight security.A large number of Sankirtan groups, musicians playing cymbals, drums, trumpets, conch and religious insignia bearers led the Daru procession from the Nrusingha temple to Sri Jagannath temple.It took about two hours for the procession to reach the temple.The Daru along with its carrier Sagadi was escorted into the Koili Baikuntha of the temple through the North gate and placed in the Daru Gruha along with other three Darus.The Daru Sagadi began its journey from Kharipadia village in Jagatsinghpur district on May 14 and reached Puri on the May 21 night covering a distance of about 150 km.The temple administration in consultation with the Daitapatis had made arrangements for their rest and night halts along the route till arrival at Puri.The Patimahapatra, a special servitor and senior Daitapatis would conduct pooja of the Darus in Daru Gruha.The image carvers would begin their work after the Snana Purnima ritual scheduled for June 2 when the Anasar process would begin for a fortnight.With this the Banajag (search operation for suitable Neem trees for construction of images of the deities Lord Jagannath his siblings Balabhadra, sister Subhadra and Sudarshan that had begun on March 29 concluded with reaching of Jagannath Daru at the Koili Baikuntha today.After placing the Jagannath Daru in the Daru Gruha of the Koili Baikuntha, the Banajag Daitapatis went to the Garbha Gruha of the temple and offered prayers to Lord Jagannath and conveyed about accomplishment of the Daru search mission.