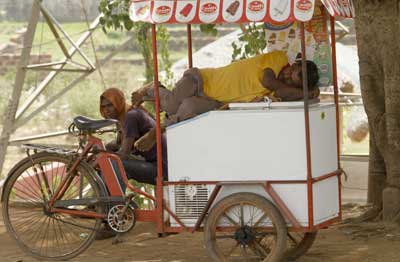 Odisha Channel Bureau Bhubaneswar, May 24: Even as heat wave continued in most parts of Odisha on Sunday, the people of Bhubaneswar heaved a sigh of relief this afternoon with a brief spell of rain.The city dwellers were happy as it rained after several days of oppressive heat wave.As the rain brought down the temperature, the people who were staying indoors till evening during the past few days were out of their homes.Though Bhubaneswar Meteorological Centre was yet to measure the rainfall in the Capital city, it appeared there are chances of more pre-monsoon rain in the next few days.Rain/thundershower may occur at one or two places over the next few days over coastal Odisha and weather will be dry over interior Odisha, according to the Bhubaneswar Meteorological Centre.As the heat wave continued to prevail over most parts of Odisha, many places including Bhubaneswar recorded maximum day temperature of 45 degrees Celsius and more during the day on Sunday.While Titilagarh recorded 46.5 degrees Celsius, Bolangir recorded 45.6, Bhawanipatna 45.7, Hirakud 46.4, Sundargarh 45.0, Sambalpur 46, Jharsuguda 45.0, and Angul 46.7.