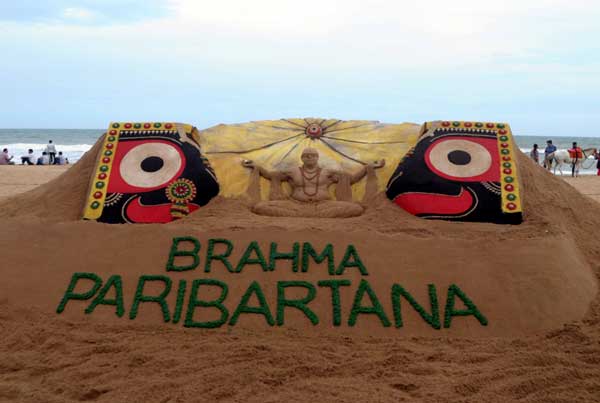 Rajkumar MohantyPuri, June 14: Stage is set for observance of Brahma Parivartan or transformation of the deities from old to the new idols, the final ritual of Nabakalebara of Lord Jagannath, Lord Balabhadra, Devi Subhadra and Sudarshan on Monday night.As per the Nabakalebara manual the Biswakarmas who were engaged in carving the images of the deities on the Neem tree trunks (Darus) in a special covered facility inside the Koili Baikuntha of the temple complex since last eleven days finish their work by Monday evening.On the other side, the ongoing Maha Yajna being conducted by Shrotriya Brahmins in the Koili Baikuntha would be concluded on Monday evening with Gajapati King performing Purnahuti.The Daitapatis would conduct the final rituals of transferring the holy Brahmans from the old idols to the new ones in the dead of Monday night.For that the temple administration had issued letters to the four Badagrahis (the chief Daitapatis of the four deities) to take up the job.Meanwhile, the servitors have carried the four Khatulis (mini decorated thrones) into the Koili Baikuntha which would be used to place the Brahmas in the new idols.The Daitapatis would place the new idols facing the old ones in the Anasar Gruha and in the dead of the night of Monday four Daitapatis would perform the Brahma transfer ceremony.Before that a complex set of nitees (rituals) would be observed and servitors would meticulously perform Sodha (purification work) of the entire temple complex.The temple would be cleared of all people except the Daitapatis on duty.Power supply to the temple and surrounding areas of the temple would be stopped for the entire night while CCTVs would cease to operate.Soon after transfer of Brahmas, the Daitapatis would bury the bodies of old idols along with Parswa Devatas (guarding deities of the three Rathas), Sarathis (charioteers), wooden horses of all three Rathas, Olata Sua (six parrots two for each Rathas fixed on the Kalashas of the three Rathas facing the sky) and other artifacts were in use in the Rathas.These were earlier carried into the Koili Baikuntha by the servitors for burial ceremony.Earlier a special set of servitors dug the burial pits in the Koili Baikuntha.Three layer security cover would be thrown around the temple.On June 27, the Daitapatis would offer free Mahaprasad to lakhs of devotees while observing the thirteenth day of the burial of the old bodies.