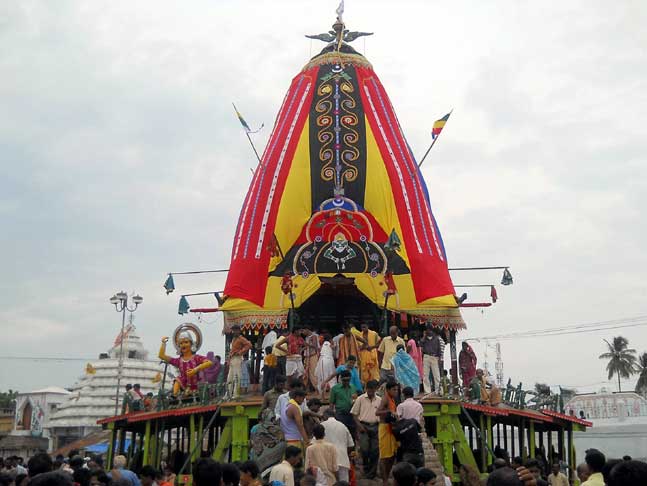 Odisha Channel Bureau Kendrapara, July 26: Amid frenzied religious fervour, the return Rath Yatra was observed in Tulasi Kshetra, the abode of Lord Baldevjew, the presiding deity of this natural calamity-prone coastal district in Odisha.The chariot, carrying the three deities, strode majestically on the grand road as thousands of devotees pulled the chariot with heightened security ring.There was large turnout of women devotees who came forward to pull the chariot.Timely temple rituals besides tight police arrangement apparently prompted women towards pious act of pulling strings of the chariot.Keeping in tune with local tradition, striding chariot came to an abrupt halt midway on its march towards the Mausi Maa temple, deities’ temporary abode.Unlike Puri Jagannath’s chariot journey, the Rath Yatra here is a two-day affair.The pulling up of chariot would continue on Saturday with the more pronounced religious fervour.“The chariot’s march goes on for two days as Baldevjew, being the Lord Jagannath’s elder brother, holds an exalted place than his more famous younger brother.That’s why Tulasi Kshetra’s chariot is not only taller than that in Puri but its circumference and width is larger than the Puri Jagannath,” noted researcher Basudev Das.Since time immemorial, this practice has been going on uninterruptedly.The administration apparently to ease its burden had tried to make it a one-day affair during mid-nineties.But the step probably invited Baldevjew’s wrath with the wheels of chariot broken open and killing two devotees in the process.Since then, observance of Rath Yatra lasts for two days, he added.The Baldevjew’s Rath Yatra in Tulasi Kshetra is a much-awaited regional event, while Puri Rath Yatra is a global event drawing lakhs of devotees.Lord Baldev’s annual car festival and return car festival has both similar and dissimilar religious traditions as it is in practice in Puri Jagannath.Attired in Vamana Besha, Raghunath Besha, Nrusingha Besha, Gajanan Besha, Gaja Udharana Besha and Padma Besha, deities in Tulasi Kshetra send home the message-prevalence of truth over evil to devotees.Puri Jagannath is incarnated in more Beshas than his sibling in Tulasi Kshetra.Both in Tulasi Kshetra and Shree Kshetra (Puri), deities’ rituals during their sojourn in Mausi Maa temple are more or less the same, said Nrusingha Patri, a Sevayat.With Lord Baldev being the elder brother of Lord Jagannath, chariot here is larger in size and shape.72 feet gigantic chariot with Lord Baldev, brother Jagannath and sister Subhadra is at least 12 feet more that Puri’s chariots, he told.Unlike the practice that is in vogue in Puri, the deities are taken out of the temple in one chariot (instead of three chariots as in Puri).The Pahandi (taking out the deities from temple in procession) of Baldevjew is different from Puri Lord Jagannath.Deities are brought in a line atop to the chariot during Pahandi ritual while in Puri, there is separate Pahandi for deities.The chariot is colorfully decorated and pulled by the devotees to Sri Gundicha temple.Adhering to tradition, both the car festival and return car festival is observed for two days in Kendrapara widely known as Tulasi Kshetra while elsewhere it’s a one day affair.With this region having sizable presence of minority community population, there is congregation of large number of Muslims as chariot is pulled by devotees to Gundicha temple.