Odisha Channel Bureau Bhubaneswar, Aug 11: Indian Institute of Technology, Bhubaneswar has signed a memorandum of understanding (MOU) with the Ministry of Earth Sciences (MES) in New Delhi on Monday for establishing the Bay of Bengal Coastal Ocean observatory in Odisha as a national facility.Ministry’s organizations viz.Indian National Centre for Ocean Information Services, Hyderabad and National Institute of Ocean Technology, Chennai are involved in the initiative, according to an official release issued by IIT Bhubaneswar. 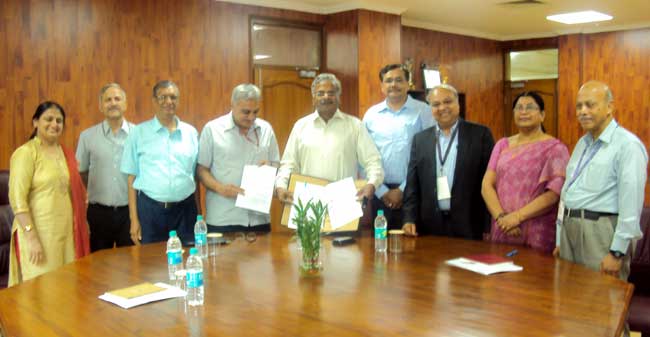 The MoU was signed by R V Raja Kumar, Director of IIT Bhubaneswar and Shailesh Naik, Secretary of Ministry of Earth Sciences in the presence of IIT Professor S.Tripathy, P.C.Pandey and UC Mohanty; Avijit Gangopadhyay of University of Massachusetts, USA; and S.Basu, K.Somasundar and Parvinder Main from MES.The Ministry has approved a grant of Rs.9.23 crore to begin with for starting the development of the observatory.The Government of Odisha had earlier agreed to provide land close to Puri for the establishment of the observatory, the release said.The MoU is a significant step towards building an important facility for research in understanding air-sea-land interactions, prediction of extreme events, marine seismology and sea-level rise due to climate change and ocean acidification etc.The observatory can be used to monitor ocean, earth and climatic parameters and systems and it is the first of its kind in the country in general and the east coast of Bay of Bengal in particular.International organizations viz.Woods hole Oceanographic Institute, USA, National Oceanographic Centre of University of Southampton are going to partner in this venture. The observational data collected by the observatory will be very useful in understanding the ocean, earth and climatic interactions which will further help in climatic predictions.Raja Kumar complimented the faculty of Earth, Ocean and Climate Science for their long standing efforts in bringing this observatory into a reality.He thanked the officials of MES for their support and assured that the institute will work with the government of Odisha in expediting the land acquisition, procure equipment for the observatory and realize the establishment as soon as possible.Sailesh Naik hoped that the observatory will spin off development of unique observation equipment which is not available in the market.