Odisha Channel Bureau Bhubaneswar: National Aluminium Company Limited (NALCO), the Navratna PSU of Ministry of Mines, Government of India, as per schedule, completed its target of constructing toilets for schools in three districts of Odisha and Andhra Pradesh.Appreciating the initiative undertaken by NALCO, S.C.Khuntia, Secretary, Department of School Education & Literacy, Ministry of HRD (MHRD), Government of India, has congratulated T.K.Chand, CMD, NALCO, “for achieving 100% target under Swachh Vidyalaya initiative” by the company. 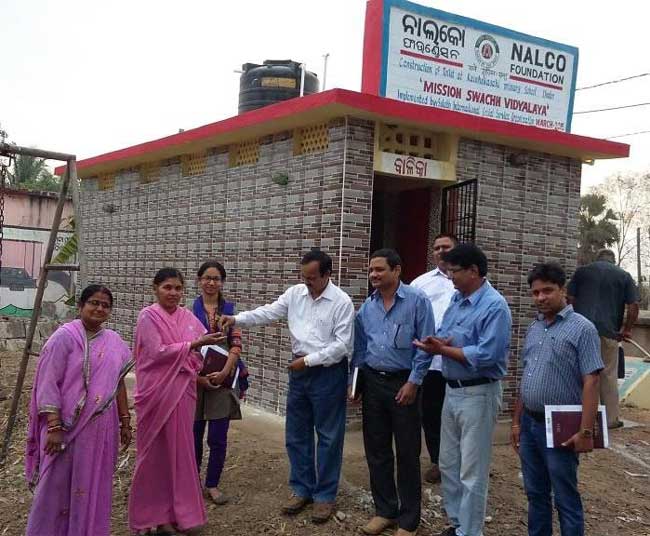 “Please convey my appreciation to all the officers who have contributed to the success in this socially important initiative,” wrote Khuntia.It may be mentioned that NALCO was asked by MHRD to construct 355 toilets in 202 schools of Angul, Koraput and Visakhapatnam districts.NALCO could successfully complete the task within the stipulated time, through NALCO Foundation, the CSR arm of the company.Swachh Vidyalaya Abhiyan was a herculean task, considering the fact that most of the schools allotted to NALCO were located in remote and Maoist-infested areas of Odisha and Andhra Pradesh.Since, some of the schools did not have any approach roads, pre-fabricated toilets had to be carried on head loads, crossing rivulets and hillocks.Despite heavy odds, NALCO not only achieved the targets in time but also constructed 79 additional toilets, beyond the MHRD target, as per ground realities and requests from school authorities.With that, NALCO altogether constructed 433 toilets in 206 schools, under Swachh Vidyalaya Abhiyan.