Odisha Channel Bureau Cuttack: Congress vice-president Rahul Gandhi today unmasked Odisha Chief Minister Naveen Patnaik blaming him for the death of over 60 infants and children at the Sishu Bhavan here.Naveen Patnaik was not aware of the deterioration in the healthcare and education system in the State as he was unconscious of the future of the Odisha’s children, Gandhi said in his remarks before the media coming out of the Sishu Bhavan.The Congress leader narrated how an ailing child undergoing treatment at Sishu Bhavan held his hand and requested him to console his sobbing mother sitting beside.“This is the spirit of Odisha,” he said, while flaying Naveen Patnaik for neglecting the healthcare infrastructure and education in the State. 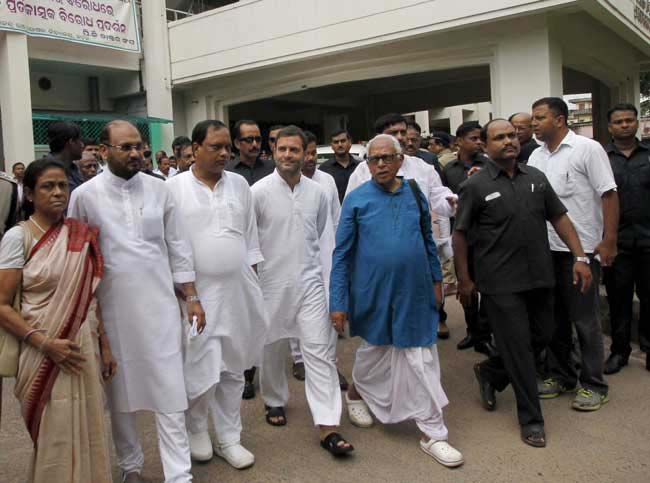 He expressed hope that his visit to Sishu Bhavan would bring the Biju Janata Dal Government under pressure to take the matters seriously.Observing that children are the future of the country, Gandhi said Naveen Patnaik doesn’t care about future of Odisha.He further said that there is no scarcity of funds in Odisha.“You have mines and sufficient funds.To run Sishu Bhawan is not a big issue.But it does not get due focus of the State Government,” he said.He clarified that he visited Sishu Bhavan for two reasons.“I came here for two reasons.Firstly, to take stock of the situation individually and secondly, I think my visit also will put pressure on the State Government to focus on Sishu Bhavan.””If the Government thinks that I am doing politics, it is ok but the Government should focus on healthcare,” he added.The Chief Minister has not so far visited Sishu Bhavan even though over 60 children died in the hospital within 10 days starting from August 20 and opposition parties had demanded immediate action on the issue.The State Government transferred the Superintendent of Sishu Bhavan along with two other doctors a day after Congress announced about Rahul Gandhi’s scheduled visit to the State most prestigious child care hospital.Gandhi, who has to attend a series of programme in Bhubaneswar after his visit of Sishu Bhavan, will return to New Delhi in the evening ending his two-day tour of Odisha.He had led a `save farmer march’ Bargarh district to highlight the plight of the distressed farmers who were committing suicide in the State.