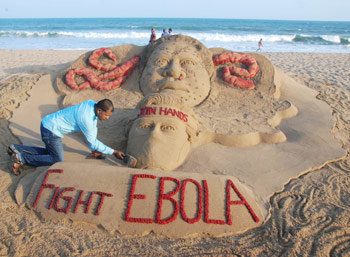 Odisha Channel Bureau Puri, Aug 19: Well-known Indian sand artist Sudarsan Pattnaik created a sand sculpture on Ebola virus with a message `Join hands to fight Ebola’ on Puri beach in Odisha on Tuesday.To create awareness about the Ebola virus Pattnaik has created a 5ft sand sculpture where he depicted the face of an Ebola affected patient.He used about 6 tonnes of sand.More than 700 people are known to have died by contracting Ebola virus in Liberia, out of a total of 1,145 deaths recorded in West Africa by the World Health Organization this year.Ebola is not known to infect people through the air – you must come into contact with the virus somehow in order to be at risk for infection.It’s transmitted through exposure to an animal that carries the virus (such as a bat or primate), through exposure to the bodily fluids of a human who is infected and symptomatic, and through exposure to items that have been contaminated with the virus.Doctors, nurses and other health workers must be allowed to carry out their lifesaving humanitarian work free of threat of violence and insecurity.Pattnaik has participated in more than 50 international sand sculpture championships and festivals around the world and won prizes for our country. He always tries to give social messages through his sand art.