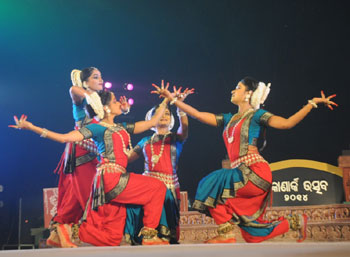 Odisha Channel Bureau Konark, Dec 1: The five-day-long annual Konark Festival began here on Monday evening with students of Guru Kelu Charan Mohapatra Odissi Research Centre and Utkal University of Culture performing Odissi in the open-air auditorium with the Sun Temple against the backdrop of the Sun temple.The students presented Odissi dance drama “Nabakalebara” wherein the story of how the temple of Lord Jagannath came into being got depicted.The inaugural evening also featured Kathak performance by Shovana Narayan and Group from New Delhi.They presented “Bhaba Chakra” the symbolic representation of cyclic existence which associated with chariot wheel, and definable sculptor of Konark.The second evening of the festival will see Sattriya performance Guru Ghana Kanta Borbayan and Group from Assam, and Gotipua presentation by Guru Birabara Sahoo and Group from Konark.Third day of the festival will Kuchipudi performance by Guru Sobha Naidu and Group from Hyderabad and Odissi by Ranjana Gauhar and Group from New Delhi.Mahari dance by Rupashree Mohapatra and Group, and Bharatanatyam by Guru V.P.Dhanajyan and Group from Chennai will the performance on the fourth evening of the fest.The concluding evening of the festival will feature Bhutanese dance from Bhutan and Odissi by Guru Durga Charan Ranbir and Group from Bhubaneswar.An international sand art festival was also inaugurated during the at Chandrabhaga beach at a short distance from the Konark open air auditorium.Both the festivals have been organised by Odisha Tourism.