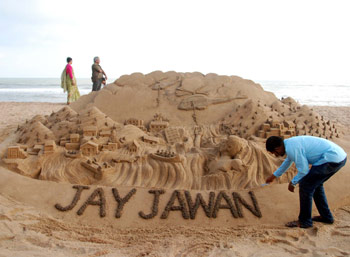 Odisha Channel Bureau Puri, Sep 10: Odisha’s renowned sand artist Sudarsan Pattnaik on Wednesday created a sand sculpture in praise of Army, Air force, Navy and NDRAF personnel who have been engaged in the relief and rescue operations in flood affected Jammu and Kashmir.Pattnaik created a 6ft high sand sculpture on Puri beach depicting how the jawans are rescuing the affected people in Jammu and Kashmir.”We created the sculpture to salute the jawans who are working day and night to rescue the flood affected people in Jammu and Kashmir, and I appeal people around the country to help the flood victims,” Pattnaik said.He used about five tones of sand and to create the sculpture by taking nearly four hours.The sculpture carried the message `Jay Jawan’.Nearly four lakh people were stranded in the flood-ravaged Jammu and Kashmir.Multiple agencies, including Army, Air Force, Navy and NDRAF were working round-the-clock to rescue the stranded people.IAF choppers have been conducting sorties to evacuate people from the flooded areas.