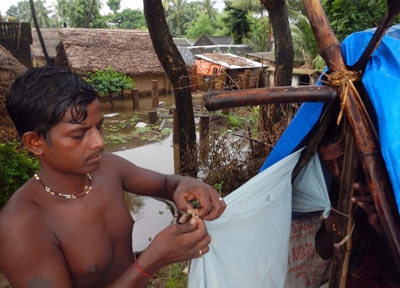 Odisha Channel Bureau Bhubaneswar, Aug 11: Flood waters started receding slowly in most parts of the affected districts of Odisha on Monday as rains had stopped in the interiors regions of the State.The flood waters had started receding in many areas, and the situation was likely to improve in a day or two, the State Government said.The death toll due floods remained at 45.As the authorities continued relief work in the worst hit areas of Puri, Cuttack, Kendrapara, Jajpur and other places, measures were also initiated to disinfect drinking water sources to prevent outbreak of epidemic after clearance of flood waters.Meanwhile, Chief Minister Naveen Patnaik directed the administration officials to ensure supply of safe drinking water to the people marooned in different districts.Patnaik also directed the departments concerned to repair the breaches that had occurred in various river embankments.At least 40 breaches had been reported from different affected districts.On the other hand, the government had started collecting information from flood affected areas about the damages caused to crop and houses.