Odisha Channel Bureau Kendrapara, June 21: With the surging tidal waves getting the better of coastal embankments, tidal waves have made its ways into seaside villages inundating mainly crop areas in Mahakalpada Tehsil of Odisha’s Kendrapara district. 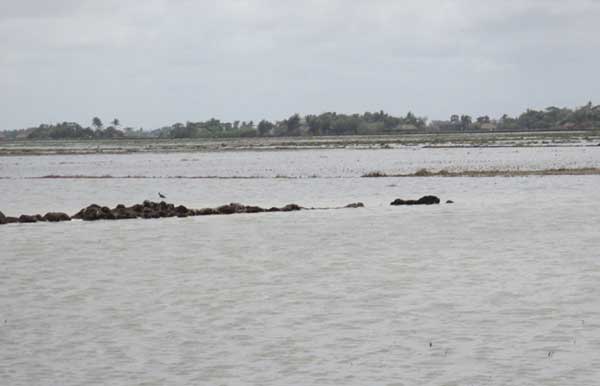 The tidal waves got the better of ill-maintained sluice gates on the embankment at strategic points leading the watery upsurge.Incidentally, the saline embankment buffer was erected about 20 feet above from the sea coast.Crop fields bearing the brunt of watery onslaught are located in Kentia, Palligada, Sarumuhin, Kochila, Bajarapur, Dasrajpur, Tentulikanda, Barakanda, Chedakani, Gojabandha, Bandhapada, Kumarpada, Mangalpur, Gopalpur, Jaanra, Keyarbanka, Nantara, and Barandanga.Around 2,000 acre of agriculture fields were inundated following the tidal ingress.“The surging water spilled over the sluice gates of the embankment.Work has begun to repair the damaged sluice gates. As a temporary measure, inflow of water has been plugged by putting in place sand-filled bags.There is no further possibility of saline ingress from the particular points.We have identified some other vulnerable breach-prone points.Measures to repair the enfeebled points have been undertaken on a war-footing,” said Jugal Kishore Tripathy, Executive Engineer, Saline Embankment Division.The saline embankment division engineers have been asked to undertake repair and maintenance work of weak embankments and sluice gates so as to stop watery inundation in future, said Kendrapara Collector, Debraj Senapati.“Hit by slipshod maintenance works, embankment built during the seventies to protect the coastal villages in Rajnagar is in a bad shape.Funds sanctioned for refurbishment of the embankment in the aftermath 1999 super cyclone and proceeding years has mostly been misused.As a result, the coastal villages are still exposed to the vagaries of nature,” charged Bijoy Shukla, former Sarpanch of Ramnagar gram panchayat.The maintenance of saline embankments is left much to be desired.There has been generous flow of funds.But the same is being largely siphoned off to compound people’s misery.The sluice gates erected at strategic embankments points are left wide open and that led to the unabated ingress of tidal waves into the human settlements, alleged Narayan Haldar, former Sarpanch of Kharinasi gram panchayat.