Odisha Channel Bureau Bhubaneswar, Aug 23: Water Initiatives Odisha has said that nothing new was discussed in the annual meeting of the officials of the Governments of Odisha and Chhattisgarh on Hirakud flood management held at Sambalpur on Friday.“Newspapers have reported that another yearly meeting between officials of Water Resources Department in Governments of Odisha and Chhattisgarh was held yesterday to discuss and review flood control measures.They discussed exactly the same issues that had been discussed in the last meeting held two years ago, in July 2012. Nothing new!” the organisation said in a statement on Saturday. 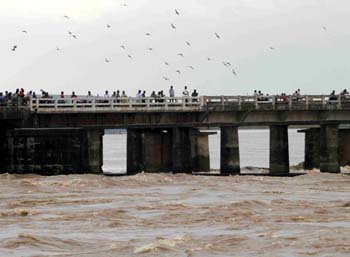 “After our repeated advocacy efforts during the 2008 and 2011 floods, when the July 2012 meeting of both the governments discussed critical issues with regard to flood operations of Hirakud Dam over Mahanadi, we were hopeful that the Governments were starting to listen to people’s concerns. However, this latest meeting has come as a big disappointment,” informed Ranjan Panda, Convenor of Water Initiatives Odisha, a state level water watchdog which has been monitoring flood management issues in the state for over two decades now.In the Friday’s meeting, it is said, Chhattisgarh officials agreed to provide information on floodwater at least seven hours in advance of releasing the same from upstream dams like Rabishankar and Bengo to allow Hirakud dam authorities to undertake water management, according to Panda.“Exactly the same promise was made by Chhattisgarh officials in the 2012 meeting. It means the Chhattisgarh government violated the last meeting’s promise and there was no follow up from Odisha government on that.Odisha government’s casual approach in this is obvious from the above,” alleged Panda, adding that “the fact that they skipped last year’s meeting confirms this further”. “It is further unfortunate that the meeting this year could not be held before the start of monsoon. Had they organised the meeting in June, mismanagement of Hirakud during the August floods could have been avoided to some extent,” said Panda.“We had welcomed this idea of advance information sharing in 2012 but are surprised that the government never followed up on that.It is not possible to manage flood devastation with such casual and faulty approach,” cautioned Panda.“Just a formality type yearly meeting is not enough. The governments should have legally binding agreements to share responsibility and fix accountability for all the man-made devastations that occur due to failure in their coordinated efforts,” suggested Panda.There were no meetings held in 2010 and 2011.The governments cannot really be so complacent anymore.“We have been asking the government to release accurate, up-to-date data on the rivers and reports of the various studies they have been doing with support of World Bank, Government of India and other agencies for better understanding of floods to prepare flood management practices. However, there has not been any disclosure from the government on this so far.Many relevant data and reports are not being opened to public domain deliberately.We once again urge upon the government to come clear on these and let the people of the state know what is happening with all such studies.We need all these for scientific management of floods where people can participate,” said Panda.