Odisha Channel Bureau
Bhubaneswar: The Bonda tribals, one of country’s most primitive tribal groups living in Odisha’s Malkangiri district, have so far remained unaffected by coronavirus. 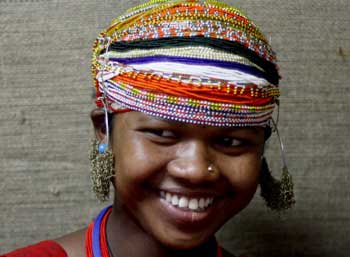 The settlement clusters along the hilly terrains of Khairput block of Malkangiri have remained untouched from the virus spread. None of the 7,000-odd Bondas ensconced in their largely inaccessible settlements has contracted the disease till date, said local authorities.

However, two COVID-19 positive cases from Bonda Development Agency (BDA) have been detected so far with one of them being a member of the Bonda tribe who was working at the agency office.

“It’s reassuring to note that the virus is yet to catch this particularly vulnerable tribal group (PVTG) tribals living in the hilly terrains in Khairput. Random sample testing has been conducted at Andahal and Mudulipada gram panchayats, which house these primitive groups. No positive case has been detected till date from the sample tests,” said Khairput Tehsildar Ramakanta Nayak.

The two staff members of BDA who contracted the virus earlier have been cured of the disease. One of the BDA employees was a Bonda tribe. The two had not come in contact with the PVTG people living along the hilly terrains. The non-tribal BDA employee had a travel history to Bhubaneswar, he said.

“Two gram panchayats where the Bondas are living are safe and there is no cause of worry of coronavirus infecting them. They are living in complete isolation, cut off from the rest of the world,” said Nayak.

Employees of BDA working in tandem with self help groups of Khairput have sensitised the primitive tribals about the deadly disease. The sensitisation campaign has paid dividends with the tribal groups strictly following the social distancing norm, informed the Tehsildar.

The Bondas, known for their distinctive socio-cultural lifestyle, were brought to the mainstream after the State government established Bonda Development Agency in 1997.

The PVGT settlers enriched with unique lifestyle, culture, costumes besides the traditional art are one of the 13 PVTG tribal groups living in the State.