Street Store organised by XIMB brings smile to many faces 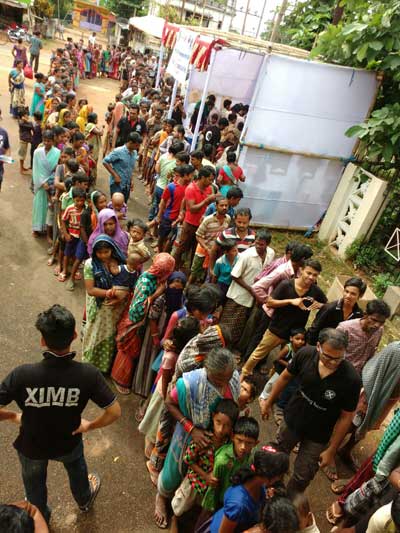 Odisha Channel Bureau
Bhubaneswar: The students of Xavier Institute of Management, Bhubaneswar organised a Street Store here today to distribute clothes to those in need.Street store as an idea started in 2014 and has been organised globally across nations since then. The Street Store aims at distributing clothing and other apparels, donated by the local citizens to the homeless and needy.

The ones in need are allowed to browse through the clothes and pick anything they like. The Street store at XIMB saw huge participation with high turnout and long queues, keeping the students of the Social Responsibility Cell busy all day.Approximately 600 beneficiaries got their chosen clothes from this store.

This Street Store is the third of its kind in Bhubaneswar.The event was organised in collaboration with the Rotary Club.Pamphlets were handed out to several slums in Bhubaneswar in advance and announcements were made on 92.7 big FM to spread the word.Preparations for the event had started a month back.A strong team of 150 members from the Social Responsibility Cell of XIMB, XUB collected clothes from students as well as the local crowd, and then sorted through the clothes, segregating them according to the type of clothing.

The stall was divided into different sections where the different types of clothes were displayed.Those who liked a particular piece could then get a token at the counter and exchange the token for the garment of their choice.Additionally, an eco-friendly paper bag was given with each garment.All the hangers and the paper bags were designed and put together by the team.

The Street Store organised at XIMB truly experienced the ‘Joy of Giving’ and brought smiles on several faces.

The Social Responsibility Cell of XIMB, XUB has organized several events in the past for children, physically challenged, and also campaigns for raising awareness for a cleaner and greener India.It is also actively involved in ‘Young Adult Education’ and several similar campaigns to educate the less fortunate.