Giraffe from Alipore dies at Nandankanan 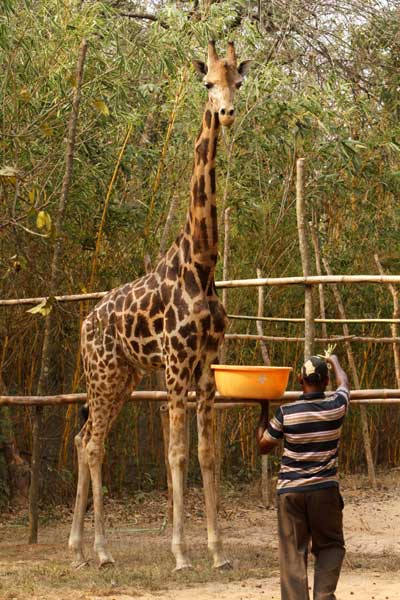 Odisha Channel Bureau Bhubaneswar: A male giraffe named Jay, who was brought to Nandankanan Zoological Park here from Kolkata-based Alipore Zoological Gardens, died on Monday.Though the actual reason behind the sudden death of Jay was not known immediately, lack of care during its transportation from Alipore a few days ago was stated to be the main reason behind it.The giraffe was brought to Nandankanan on February 24 in exchange of four tigers.It was kept with Khushi, the lone female giraffe at Nandankanan.Khushi has turned lonely again with Jay’s death.State Forest and Environment Minister Bikram Keshari Arukha has ordered an inquiry into the death of the male giraffe.It may be recalled that another giraffe had died in 2008 while being brought to Nandankanan as the vehicle carrying the animal came in contact with live electric wire.The five-year-old Jay has died and Nandankanan has lost four tigers that were already handed over to the Alipore Zoo.Animal lovers have criticised the Nandankanan authorities to fix responsibility and take stringent action in case it is found that Jay died of negligence on the part of those who were in charge of the giraffe’s transportation and subsequent care in the new environment.